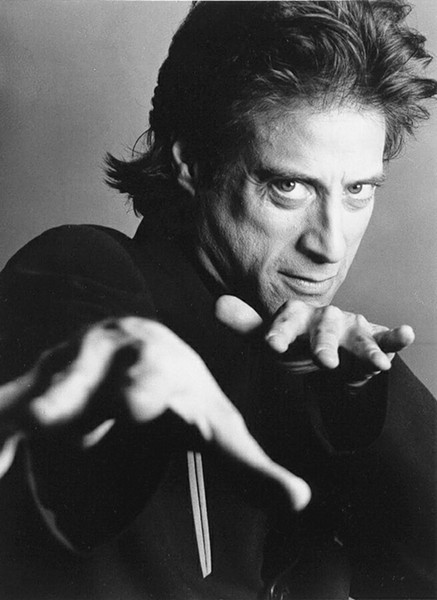 Most comedians are neurotic alcoholics (recovering or enabling) who must manage a host of insecurities while devouring their own egos for material while sinking periodically into the oblivion of depression as they try to keep hold of the dream of popular recognition. Of these comedians, Richard Lewis is the patron saint. He flings his anxieties at audiences with desperate purpose while enjoying that rare ability to make his act feel entirely effortless.

You’ve reached legendary status as a comedian, worked with every leading figure in the industry, and had a major hand in evolving the business as a whole, let me ask you this: worst place to get a rash?

You’ve done so much in this industry and for so long. Is there something you haven’t done that you’d like to attempt?

I think I have a really bad Eugene O’Neill play in my gut I’d like to get out.

You’ve said before you don’t really have a set, how do you keep yourself so in the moment while being funny. Can you ever turn it off?

I used to bring notes on stage with hours of new material. I stopped that and my performance level became better. I’m in the moment now more than ever because I don’t have a clue what the show will be about, and two, after 41 years I finally have a disturbing bit of serenity about my work and now really enjoy just making people laugh.

Now sober, what’s the major difference between your career today and when you were using?

Well, my whole life is better. After almost 18 years sober I have learned to work on my defects and that has opened up a Pandora’s Box of material for me. But mostly, the few years before I bottomed-out on crystal meth, I stopped performing for years. Somehow I’m alive and feel better on stage now more than ever — so I’m tremendously grateful even though I have a hard time showing it.

How do you see standup comedy now as opposed to when you started?

I have no clue. I root for all comedians with authenticity. I rarely listen to any other comedians as I don’t want any of their premises or notions to stick in my head.

How does Richard Lewis relax?

When you find out let me know. •