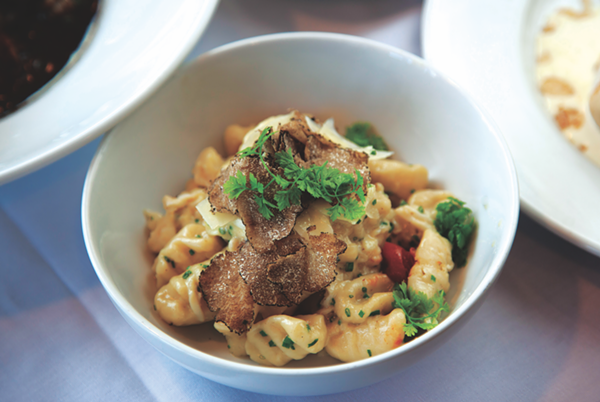 New Dunkin’
Stone Oak can officially claim a Dunkin Donuts/Baskin-Robbins as of February 14. The new store, which opened at 23505 Hardy Oak Boulevard is finally open for business after a few days of trial runs.

According to Facebook, Dunkin/Baskin will offer a free medium hot or iced coffee through February 22 to celebrate the opening of the location. The store is now the fourth in the area to offer both ice cream and doughnuts in one. 23505 Hardy Oak Boulevard.

Lüke San Antonio, 2010-2017
After opening in 2010 and helping spur on a sea of change in the San Antonio culinary scene, Lüke San Antonio, celebrity chef John Besh’s first restaurant outside of New Orleans, is closing. The Door Online, the public relations firm for The John Besh Restaurant Group shared this statement from management: “After six years in business, the Besh Restaurant Group has decided to close Lüke San Antonio. Our last day of service will be February 28th. We are grateful for the ways in which the community has embraced and immensely supported the restaurant since it opened in 2011. ”[sic]

The news comes after months of industry speculation following what some called a “hit job” of a review from the Express-News’ food critic Mike Sutter. In his mid-October review headlined “The Party is over for Lüke on the Riverwalk,” Sutter went on to share several experiences at the New Orleans brasserie. Here are some highlights:

“From spoiled oysters to amateur service to a menu that’s overpriced and under-executed, Lüke has lost much of what made its graceful union of antebellum parlor and boozy dancehall bar so charming in the first place.”

“Ordered raw, they tasted like the inside of a basketball shoe, both spoiled and despoiled with shell fragments from the shucker’s knife. The shells of charbroiled oysters bristled with parasitic mollusks whose blackened edges flaked off when handled. This isn’t dollar oyster night at a dive bar. This is Lüke, where a half-dozen sets you back $14 to $16. There’s no excuse for that kind of sloppiness.”

“But the balance of my Lüke experience fell squarely in the languid execution zone favored by more modest hotel restaurants. An iron dish of shrimp and grits came to the table half-cool, with big flowery spices and overcooked shrimp for $27, and the modest textural contrasts and flatline flavor of a fried oyster salad with lardons and avocado didn’t support its $16 price.”

Chef John Russ is no longer with Lüke, having turned in a resignation mid-November of last year. He and wife Elise are working on opening an eatery of their own sometime this year.

Lüke San Antonio was first opened by executive chef Steven McHugh, who left the restaurant to open Cured in 2012. McHugh recently received a semifinalist nod in the Best Chef Southwest category for the 2017 James Beard Awards.

The James Beard Foundation announced a list of semifinalists for the 2017 Restaurant and Chef Awards. The list, compiled through various submissions and nominations, includes two San Antonio nods.