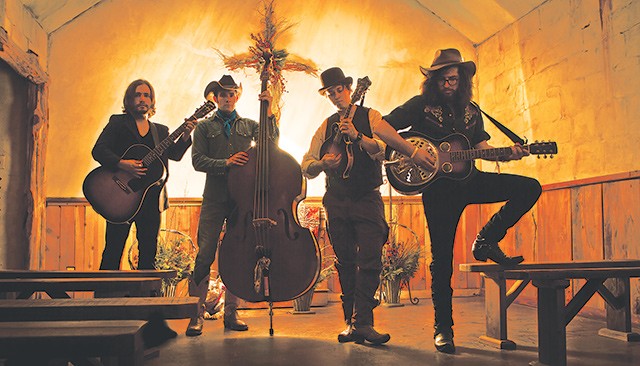 Science of Flight — the 2012 sophomore release from El Paso-bred, Austin-based quartet the Dirty River Boys — is constructed from just about every type of music made in America on an acoustic guitar before the Vietnam War. Folk, blues, bluegrass, country, and gospel (not to mention Dixieland jazz, traditional Mexican, and Roma music, plus a baby rattlesnake) all make appearances, but the music never sounds like anything other than a product of the internet age. The press photos depicting four 20-something dudes made up like miscast Deadwood extras, are expected, if not mandatory, but the Boys aren’t exactly the Sons of Mumford.

“Marco [Gutiérrez: guitar, vocals, mandolin, and harmonica] grew up listening to punk rock,” says Nino Cooper (vocals and multi-instrumentalist). “I grew up playing blues guitar and playing folk songs with my dad, a few old Mexican folk songs with Spanish guitar. CJ [Colton James] our bass player, his all-time favorites are like Hank Williams and George Jones, and Travis [Stearns, who mostly plays the cajón, a Peruvian percussion instrument also used in flamenco] kind of grew up touring in the metal scene.”

Sounds like they’ll fit in perfectly in South Texas, but Cooper says the Boys’ music is pure Far West Texas, specifically the miles of inhospitable desert separating it from the rest of the civilized world.

“I think we’ve just remained who we are,” Cooper said. “Growing up in El Paso, we really weren’t too familiar with the whole Texas music scene, so I think we were kind of in a bubble. I think we’ve developed what we like to think is a pretty unique sound and we definitely want to hold on to that.

Moving to Austin has definitely inspired some songwriting and that kind of thing, but as far as our sound, I don’t think that much has changed.”

Cooper acknowledges that the current popularity of Mumford & Sons and the Lumineers makes 2013 a pretty good time to be a band with two mandolin players.

“We’ve been seeing it more and more on the road,” Cooper said. “In these new markets a lot of these bands are springing up. I’m not sure if it’s on the rise, but it’s definitely coming up out of the woodwork.”

But, he adds, the Boys’ early move from an electric country rock band to an all-acoustic outfit isn’t an attempt to chase a trend but the solution to an uncool reality of working as a full-time band: playing at moderate volume in the corner at restaurants that can’t or don’t want to accommodate amps and drum kits.

“It basically came out of necessity, man,” Cooper said, “out of playing these smaller rooms, playing everything from Sunday brunches to taco bars to three-hour shows in hotel lobbies. That whole acoustic instrumentation just became part of who we were … the sound we evolved into.”

The countless café gigs also allowed the Boys to shape their songs in a low-pressure environment. Slow nights at restaurants are the perfect opportunity to experiment with new ideas.

“We barely rehearse,” Cooper said. “I think we’ve rehearsed two times in our history. So when we write a new song and try it out, usually the first time we play it live is really the first time we’ve ever played it. Sometimes, it’s a train wreck on the first time or the first two times, but by the third time we’ll have a good grasp on it, start evolving, start experimenting with different harmonies and that kind of thing.”

So the Boys’ show at The County Line will either be a good opportunity to see an on-the-rise band for free (with a canned good to donate to the San Antonio Food Bank), or if it’s a slow night, you might just get to watch a train wreck.