Food & Drink » On the Rocks

Risks and rewards of sipping through the tequila family 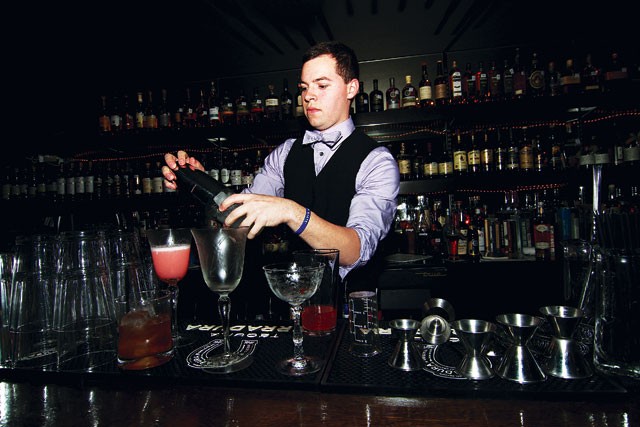 The evening began with a Decolletage. An explanation follows.

Though an enhanced appreciation of cleavage may be the result of downing too many Decolletages, we are, as it happens, talking about a drink, not anatomy. Composed of 1 1/2 ounces of tequila, 1 oz Lillet Rouge, 1/2 oz Aperol and 1/4 oz Fernet Branca, the uncompromising cocktail was Don Marsh's suggestion for a warmup to his recent tequila tasting at 1919. When embarking on an evening of tasting with anyone as unabashedly opinionated as Marsh, a stout drink is not such a bad idea.

We were told, for starters, never to utter the "P" word. (Hint: It's a popular premium tequila packaged in a squatty bottle.) We also learned that he has "yet to find an American-owned tequila worth buying." (Take that, Kinky.) But we also were regaled with some useful tequila history and definitions before settling in to taste an array of truly exceptional tequilas, beginning with three from the Herradura label.

The idea here was to see how a single producer moved through the aging ranks from blanco (effectively unaged) to reposado (less than a year in oak barrels — said to be repurposed from Jack Daniel's), to añejo (in this case, two and a half years in French oak). The Herradura blanco is one tequila I almost always have on hand, and this night it was its usual spicy, peppery, vegetal self — a perfect introduction to the category, in other words. The spice component has mellowed in the reposado, though it's still there, but a new layer has been added: vanilla and a touch of cocoa. Often I find añejos too tame for me; many seem to want to become Cognacs, leaving behind their agave ancestry. But not the Herradura; its essential character has simply been robed in classier duds. The family resemblance remains.

We next sampled the same range of categories but with different producers, beginning with another Herrradura, the Hacienda del Cristero Blanco. While clearly still a blanco, this special edition seemed to me to be more perfumed on the nose and fruitier on the palate. Yes, it was still assertive, but there was also a lighter, more seductive quality. The Carmesi Reposado, aged just a day shy of a year, is alleged to have been created with women in mind, but don't let that stop you — or spur you on. Yes, it's a smoother, lighter style, but also somehow tighter, drier, and, well, more sophisticated than many. Siembra Azul is a newcomer on the market, and it's almost encouraging to see that they haven't spent all their money on fancy packaging. Their añejo is aged in virgin American oak for from 12 to 36 months.

Siembra Azul's website suggests that one can get flavors such as cinnamon (yes), tobacco (maybe), and raspberries (not really) from the añejo, but I suspect a lot of swirling, sniffing, and sipping would be required to prize out all the drink's complexities. This is the kind of activity best carried out at leisure and with the appropriate glassware. Siembra Azul suggests a snifter; one of Riedel's tequila "flutes" would also be a good choice. (I use mine for prosecco and cavas, too, thus justifying the expense.) The caballitos, or shot glasses, are best for simply slammin', and we aren't going on record as suggesting that. Too risky in the décolletage department.