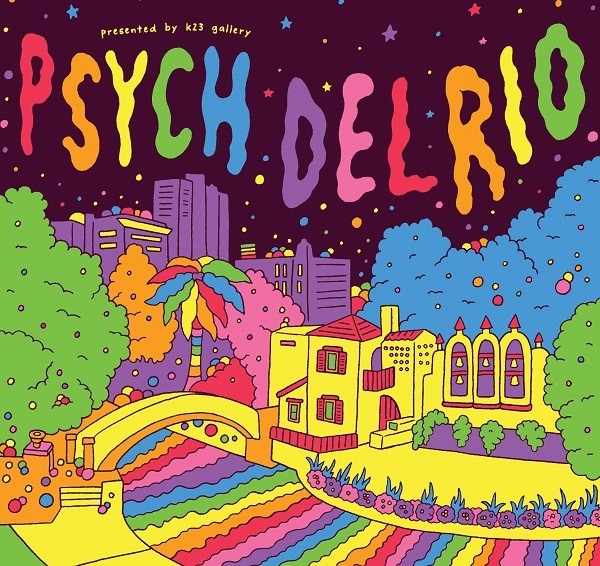 Psych del Rio, as we first announced back in December 2016, is a new, free (!!) psychedelic music festival that will take place on Saturday September 23 on the banks of the San Antonio River at Arneson Theatre. And, here's the thing: this is the best music festival, pound for pound (if you will), that the Alamo City has ever seen, at least in recent memory.

No disrespect to River City Rock Fest, Maverick, Untapped, Mala Luna, or the like, but this carefully curated lineup is absolutely without a weakness. It is fresh and relevant yet reverent to the history of the far-flung genre. Plus, it's got a prime location. And, did I mention it's fuckin' free?

(I have to imagine that any tourist finding herself floating on a barge between the stage and the crowd on Saturday will quickly be making plans to call Saytown home.)

The whole mad affair has been orchestrated, along with help from a slew of local sponsors, by Gem and Glenn Hotvet, who own and operate K23, a venue that's never been shy about waving its freak flag in the form of groovy music and art.

Our readers will be aware that, of late, the curatorial power couple with impeccable taste has been branching out, making a concerted (see what I did there) effort to host shows in less conventional settings (those Planetarium shows tho). Psych del Rio is the culmination of these efforts to expand.

Gem Hotvet is not shy when it comes to talking about her love of music. "Without music life is draped in a thick, scratchy blanket of awkwardness and unease," she told the Current.

Discussing her and Glenn's efforts in general, as well as Psych del Rio specifically, she elucidated a kind of admirable credo:

"In the end my goal is to enrich the musical fabric of my hometown. I don't think that the quality of our music should be corporatized and attached to a dollar sign. San Antonio has such a vibrant, rich culture and so many passionate people, we really don't need to pander to them with bad radio and sub-par lineups on tired Fiesta events."

"I think the final decision came once the election happened," she said, "with all this awful bullshit going on I wanted to do something positive, to put out an uplifting vibe."

Now let's get back to talking about this lineup.

For starters, eschewing all pretense to egalitarianism, let's look at the biggies.

Bubble Puppy, the elder statesmen of the bill, are a San Antonio band that was originally active in the late 1960s, when our region was still known as a psych-rock hotbed. The band's one proper album, which included its only hit "Hot Smoke and Sassafras," was 1969's A Gathering of Promises.

Psychic Ills, a band from New York on the righteous label Sacred Bones, is a shapeshifting act that has dabbled in just about every flavor of psych music, from electronic exploration to its current jangly, rootsy, and dreamy incarnation.

The Warlocks hail from Los Angeles and traffic in a heavy, dark, and grungy (shoegaze-y?) brand of lysergic sound. With a voluminous back catalog, this band could, all by itself, melt your face all night.

And, lastly, I'd be remiss not to mention some of the local/regional acts that comprise the core of Psych del Rio's lineup. You gotta dig San Anto's Sunjammer (muddy and loose proto-psych/freakbeat) and Mockingbird Express (throwback psych-blues), as well as Anabelle Chairlegs (marauding psych-pop from ATX), Tele Novella (retro-flavored mod-pop from Lockhart), and Sherry (sunny art-pop from ATX).