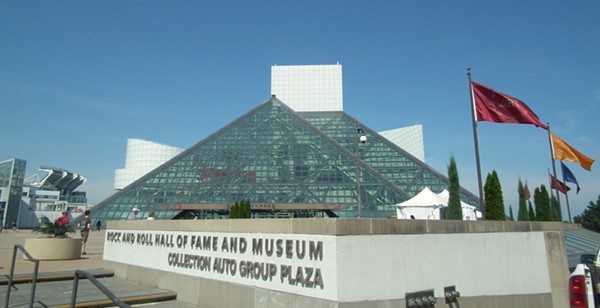 A brassy, white boy soul group? Check. An influential and highly topical hip-hop group? Check. Three other gimmes to satisfy the loose-and-getting-looser parameters of what exactly makes a group worthy of being inducted into the Rock and Roll Hall of Fame? Check.

With this year's list of honorees, the museum and shrine to Dad Music sets itself further apart from actual rock 'n' roll listeners. To me rock 'n' roll is not just three chords, a Fender Stratocaster and attitude. It's simply attitude. It doesn't upset me that N.W.A is being inducted. The infamous hip-hop group from Compton challenged the status quo and the white establishment that aimed to disparage and disregard them as thugs, gangsters and lowlifes – as if the politicians and moral custodians at the top of the hierarchy are not the worst thugs, gangsters and lowlifes. N.W.A may be accused of glorifying violence and misogyny, but their function is as artists. Freedom of speech can be a motherfucker. However, they are not enacting laws and enforcing their own interpretations of what is best for America. Their power is primarily cultural and artistic. To be fair, there are great arguments as to the inconsistency of a "hip-hop" group being inducted into the hall before the hundreds of other deserving acts, artists and groups that are much more easily definable in the classic rock 'n' roll sense.

One point of contention for local rockers is the continuous exclusion of homeboy Doug Sahm. For years now folks have been trying their hardest via petitions, documentaries and appeals to the masses to have the leader and Sir Douglas Quintet, Bob Dylan favorite and musician of legendary skill included in the annual inductions to no avail. I, frankly, couldn't give two shits about who does and doesn't get to display their tubular wares in the museum in Cleveland, that isn't what rock 'n' roll is anyway. It's real and it's alive and it's happening anytime anyone anywhere breaks some sort of musical rule for any selfish and foolhardy reason. In fact, being inducted into the Hall of Fame is, to me, one of the least rock 'n' roll things you could do. However, it is interesting to discuss and there are fascinating dynamics and motivators at play here.

The rest of this year's inductees are Deep Purple, Cheap Trick and Steve Miller. As of 2015, notable non-inductees include slinky, sex-asaurus T. Rex, Iron Maiden, Surf master Dick Dale, Judas Priest, Captain Beefheart, Motörhead and Ozzy Osbourne, to name but a few. It almost seems like better company to not be included now doesn't it?

Just as Britney Spears has graced the cover of Rolling Stone numerous times and Dylan is in IBM and Chrysler commercials, so too will Justin Bieber or Lady Gaga one day be walking across that stage, accepting the keys to the kingdom of corporate-cultural acceptance. And that is kind of rock 'n' roll in itself; the absolute shedding and co-opting of closely held beliefs and commitments, even if they belong to the "true" rock 'n' rollers.