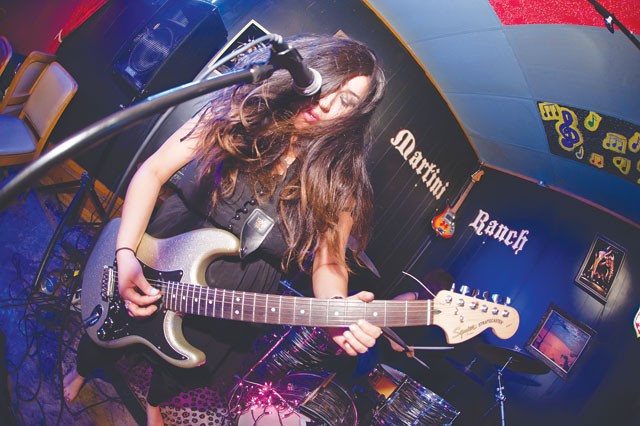 My first exposure to Martini Ranch was a rowdy one. On Saturday, December 10, the West Avenue bar hosted a fundraising event for the Bexar County Roller Girls, which came complete with a live punk-rock soundtrack. A rambunctious crowd threw back pints of Lone Star like like it was their job. On special, these oversized glass mugs of brew are priced at just $1.75 and practically require two hands to wrangle.

Even without the rollers and rockers, your prissier drinking buddies should probably skip this spot — as should the Grinches, as there’s some serious holiday décor rocking. Lights, trees, stockings, and sparkles adorn every nook and cranny. The kitschy bedazzlement worked for me, successfully remedying an initial apprehension about arriving at a street-level eyesore.

Our crew headed straight to the bar to grab a round of beers and received immediate service with a smile. Later, I learned that one of the friendly faces belonged to Jamie Hoppe, who has been one of Martini Ranch’s owners for more than three years. She made me one of the bar’s specialties: a shot of Jameson chased with a shot of pickle juice called a “pickle-back.” I had to grow a pair quick when I realized that a group of guys at the bar was waiting to see my reaction. Surprisingly, my taste buds were so shocked by the pickle juice that they completely overlooked the evil Jameson. Martini Ranch goes through about 10 gallons of pickle juice a week, Hoppe said, and shots normally go for $5 each ($4 on Mondays).

Live acts are featured throughout the week, but the Saturday shows are worthy events. Local talent Jason Trevino (acoustic punk, The Rosedale Highs) started off the live music lineup this night around 10 p.m., followed by femme fatale trio Heather Go Psycho (hardcore-meets-hot pink). The bands play in a side room, set up on an animal-print rug with a backdrop of red velvet curtains and portrait of Elvis. The night also featured a set from Austin’s Sixty Minute Man and Clash tribute band, Clampdown. (Speaking of rowdy was one memorable band taunt: “You better rock, bitch!”)

Martini turned heads with the recent announcement that its weekly open mic would be led by San Antonio’s rock darling, Nina Diaz of Girl in a Coma, fresh off a national tour. The bar also hosts Rockabilly Tuesdays with The Barn Burners, karaoke on Wednesdays, and live music on Thursdays and Fridays (though there is no set schedule for this yet).

San Antonio’s second roller derby organization, the Bexar County Roller Girls, organized the night’s festivities to raise money for the team’s travel expenses. With a coach known as “Hollow Point” and 42 current members, the ladies in attendance at Martini Ranch let us all know that “kickin’ ass is what we do!” I was told that while practice is held twice a week, many train up to five days a week. “Life is short,” a derby flyer reminds us. “Skate hard.” (The season starts in Feburary, check BexarCountyRollerGirls.org for more info on trying out or attending.)

The rainy weather packed us all indoors, which is really a shame because the crowd that night really could have benefitted from the use of Martini’s recently opened full bar on the patio out back. Multiple dartboards and a pool table could have provided additional entertainment had the place not already been so jam-packed full of awesome. Martini’s management also leases the parking lot next door every night for patrons, who had previously complained about cramped parking conditions.

The establishment could be a serious contender among a seemingly endless slew of hodge-podge dive bars in San Antonio, as evidenced by its welcoming atmosphere, support of the local scene (music and otherwise), and efforts to improve. The pickle-juice aftertaste wasn’t even enough to sour me on the experience. •

Best Use Monday open mic with Nina Diaz (Girl In A Coma); Saturdays for live music and cheap drinks.