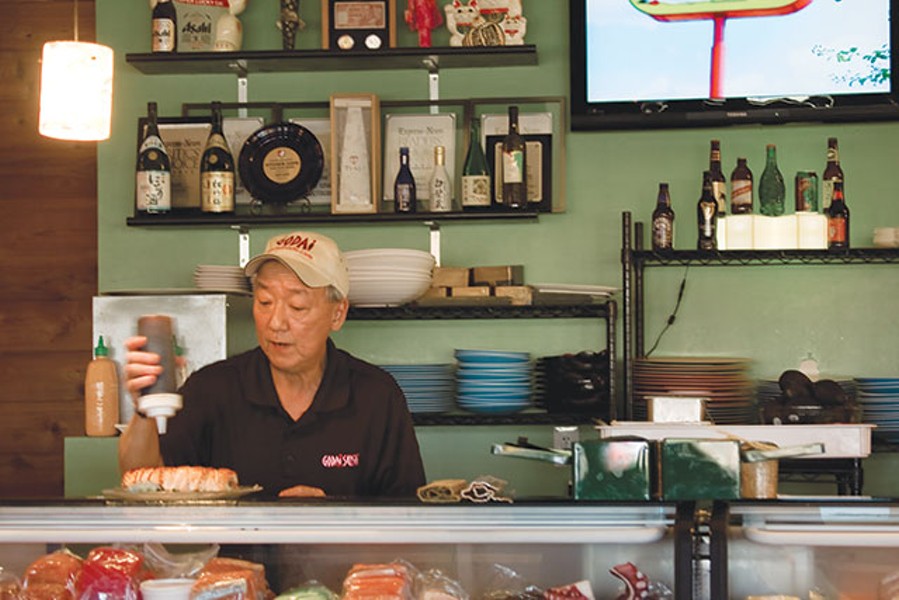 Chips and salsa, sea salt and caramel … let’s add saké and sushi to the list of heavenly pairings. Unlike everything else I gave up when relocating to Texas from Hawaii (Spam musubi, anyone?), San Anto’s sushi take is comparable to that of the big island … and the saké choices aren’t bad either. I sampled some of my favorite joints to determine the best saké bomb for your buck, which rolls pair best with a fermented rice counterpart and the tastiest sashimi happy hour deals.

If there is one place in San Antonio that reminds me of the sushi bars where I used to eat growing up in Hawaii, Godai’s is it.

The joint’s got you covered on the saké and beer front. Not only do they have hot (Sho Chiku Bai) and cold (Chikurin Fukamari Junmai) sakés, they carry a sparkling saké (Hou Hou Shu) if you want to mix it up. Sapporo, Kirin and Asahi round out their standard malty offerings.

Make sure to try their specialty rolls, such as the amazing seafood enchilada roll. Upon delivery, it looks like anything but a sushi roll. A mound of squid salad buries your roll, where spicy crab, seafood (your choice) and avocado await. Pair it with the Sho Chiku Bai nigori, an unfiltered saké, to really complement the roll. The grainy, husky drink’s lightly sweet taste pairs well with the salty squid and spicy crab.

Make sure to go on Tuesdays and Thursdays (5-6 p.m.) if you want to take advantage of their sushi happy hour, where sushi starts at a low $1.25.

Osaka is an above average sushi restaurant saddled with a strip mall restaurant feel. Make sure to try their plum saké ($8) with the Ninja roll ($11). I’m usually not a fan of fried rolls (such an anti-sushi vibe), but the spicy tuna, mayo and eel sauce come together exquisitely. Dip the corner in some Sriracha to highlight the taste.

Don’t bother asking the waiter for any saké recommendations. Your best bet is to bust out your phone. There will be much less “uhhh”-ing and “hmmmm”-ing before ultimately getting “I really don’t know. We have Sake-Ritas though…”

If you are there during their happy hour (5-7 p.m., Sunday through Thursday), make sure to take advantage of the discounted sushi prices. You can get two rolls for $15 or three for $20, as well as $6 saké bombs and $3 draft beer. The saké bombs here are definitely a good value. You get a healthy amount of saké but maybe not quite enough beer, which seems to be the opposite of most places, but at least in this case the imbalance works in your favor.

Sumo Japanese Steakhouse, with its gimmicky decor and touristy feel was unsurprisingly mediocre. The Sumo happy hour (daily, 4:30-7 p.m.) and reverse happy hours (Friday and Saturday, 9-11:30 p.m.) provided decent deals with half price rolls and $3 you-call-its, but there were few standout rolls and not much on the saké front (six total).

The titular Sumo roll was one of the few noteworthy options. The tempura shrimp, cream cheese, cucumber and avocado, combined with an exceptional eel sauce, led to a very clean-tasting roll. Paired with the $13 a glass Hakutsuru Sho-Une saké (somehow the most expensive was also the most recommended by the sushi chef), the roll was enjoyable. I would stick to the sashimi though if you want to mix it with their saké.

Rounding this trip out was a generic saké bomb, truly a no frills affair. You didn’t get the beer bottle with the saké, and it seems like they only poured half of it into the glass. Muy lame.

With its small yet intimate sushi bar area, you might think that sushi at Yummi was an afterthought—but you’d be wrong. You can catch glimpses of Yummi’s award-winning past here and there as you sample some of their signature rolls paired with their expansive Japanese drink menu of 10 sakés and six beers.

One of their best saké/sushi pairings is the baked white fish roll and Sho Chiku Bai Nama organic saké. Made with white fish and thinly sliced lemons, eel sauce and a masago and green onion topping completes the roll. Baked rice on the outside adds a nice crunchy shell to this clean and zesty option. It is a real change of pace for those stuck in a sushi rut.

If you can make it out during Yummi’s “3-pon” Happy Hour (5-7 p.m., Monday-Thursday), do so. Yummi’s long list of specials makes exploring their menu much easier on the wallet. Three bucks off selected dinners, buy-one-get-one-half-off sushi specials and $5 saké bombs are some of the highlights.