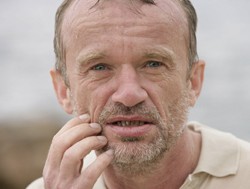 
It’s not the first time I’ve used this quotation, and it certainly won’t be the last: In literature — as in life — characters lie, and they don’t always come clean about it. It’s up to the truly thorough reader to catch them, thus identifying an entirely hidden plane of meaning within the text. That (or thereabouts) is what a college professor of mine always said, anyway. About the Bible. But I think we can all agree it’s true of non-religious texts, too.

Claude Lelouch’s Roman de Gare is full of deceitful characters, all unaware that they are making their way into a novel called God, the Other. It is a story of reversals and revenge, but also concerns itself with more tender matters, like trust; in short, it makes for a perfect night of foreign intrigue (avec du café).

The metaphysical thriller’s author is played by husky-voiced French actress Fanny Ardant (whom I’m embarrassed to say, I first be-fanned in Sydney Pollack’s Sabrina). She doesn’t flash her killer smile much here, as the film really belongs to Dominique Pinon, whom even French-film acolytes will remember as Joseph from Amelie. He is an enigma, a gentleman traveling by road, acting suspiciously like a just-escaped rapist. He rescues an abandoned woman at a rest stop from personal humiliation by agreeing to pose as her doctor-fiancé on a visit to her folks’. Then things get interesting. Once they arrive at the pastoral home, we have no idea what’s in store: Will the mystery movie morph into a blood-soaked slasher? It’s all up in the air, as if the screenwriters were playing Choose Your Own Adventure.

“Roman de Gare” means, essentially, “airport novel,” and Roman plays like a particularly good page-turner (better than the Da Vinci Code, anyway), elevated by fine performers, sexy lighting, and the aforementioned tenderness. If you can stay one step ahead of Lelouch and Ardant, well, then, you’re one step ahead of me.