Ron Young faces mortality with a little help from his friends 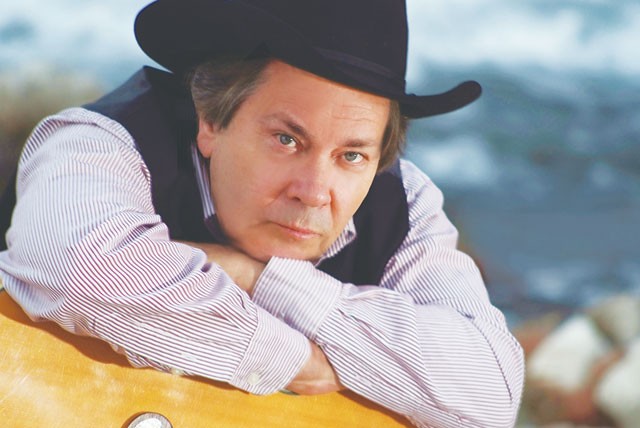 Life's defined by its challenges. In writer/musician Ron L. Young's case, it's a banked curve revealing either just another twist or the more ominous "homestretch." The former Current and San Antonio Light journalist and Nashville songwriter is facing the big "C" for a second time. "I don't have cancer," Young says. "It has me."

Young speaks during a break from recording a new batch of songs, the potential follow-up to last year's Under the Texas Radar. He's working with producer Patrick Joseph again in a spare, guitar and vocals manner, abetted by subtle embellishments. Young views the dozen songs in a plain-spoken manner that belies his predicament. "I don't know when it would be released," he says, "but I'll have it just in case."

Most were written during Young's 14 years working at Nashville publishing houses after leaving journalism in the mid-'90s. Young first battled melanoma while living there in 2004. Declared in complete remission in 2010, he felt safe until finding a lump in September. He was diagnosed with stage IV melanoma. It doesn't get much worse. "There is no stage V," he wryly notes.

Young, like many musicians, was without health care. He recently joined CareLink through San Antonio's University Health System, but the optimal treatment is only offered by a doctor outside his network. Broke, aside from Social Security, he's awaiting word on funding from a foundation in Santa Rosa. Otherwise he'll have to pursue a less aggressive/effective/costly treatment.

"The stress is going to kill me if nothing else, waiting around for all this stuff," he said. "I haven't played in months. I took everything off the table so I could address this situation. I hope the cancer's moving a lot slower than the doctors."

It's a difficult situation, but one with which HAAM (Health Alliance for Austin Musicians) is intimately familiar. Begun eight years ago, the Austin organization doesn't rely on government money, instead filling the coffers with fundraisers, private grants and community donations. Their chief benefactor is Seton Healthcare, which started the ball rolling when they offered 500 beds in perpetuity. HAAM raises nearly $10 for every dollar spent, frequently leveraging organizations already serving low-income populations. No counterpart organization exists in San Antonio.

"Musicians bring in nearly $2 billion to [Austin's] economy, yet they're living on around $16,000 a year, so they are truly the working poor," says Carolyn Schwarz, HAAM's Executive Director. "They're self-employed so they don't have access to jobs that give them benefits, otherwise they couldn't tour... [yet] they bring so much to the community."

Besides recording, Young's kept busy organizing a benefit on his behalf and the local community's stepped up. Besides performances by Augie Meyers, The Infidels with Patricia Vonne and Ruben V among others, Young's auctioning off his collection of rare autographs (Lou Reed, Robert Mitchum, Brian Wilson, Ray Charles) accompanied by a written narrative of each signature's circumstances.

Hank Harrison backs Young on Under the Texas Radar and is playing the benefit with his old band, Tennessee Valley Authority. He sees a chance to give back.

"It's just terrible when stuff like this happens to anybody and especially such a nice guy," Harrison said. "It really gets everybody's attention. All these musicians have had their bouts with health problems. They know how expensive it is."

If there's a silver lining, it's the compassion Young's witnessed.

"I don't feel I'd have this support if I'd stayed in Nashville," he said. "Something was drawing me home in ways I didn't realize, and this might have been one of them. This is where your friends are."