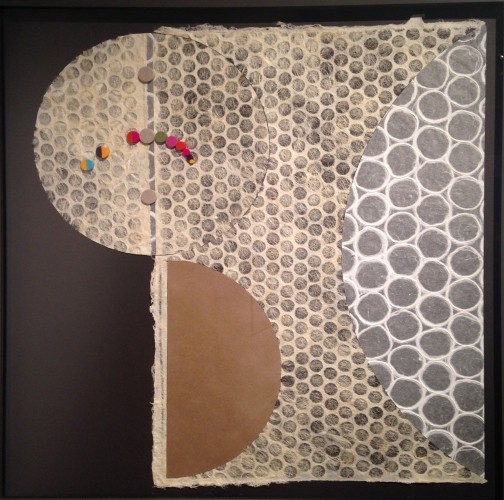 After a five-year bout with cancer, San Antonio artist Jesse Amado is back in the studio and making new work that he is showing for the first time in "Aesthetic Encounters" at Ruiz-Healy Art. He created a series of three pill boxes titled Refilled, Still Good and Time to Refill, which chart the slow depletion of his meds in the form of colorful, soft tablets made with virgin wool felt.

"When I found out I had cancer, I suspended everything and stopped making art to concentrate on getting well," Amado says. "When I started feeling better, I picked up where I left off working with felt. Now I can get felt in a variety of colors and that's given me a new palette for my work. I've always liked the transformative qualities of art and the contrast of hard and soft materials in sculpture."

Green, gold and blue felt tablets also show up in Amado's Trying to Be Perfect #4, a wool felt collage on paper about the tension of trying to be perfect in all ways, including being perfectly healthy. Described as made with "Polychromie Le Corbusier," two large blue ovals draped with soft layers of colored felt, Ovidal #1 and #2, seem to reflect the new possibilities that have opened up in the 63-year-old artist's life.

"I feel like I've come full circle," Amado says. "Cancer has given me a new attitude about making art. I used to go through a lengthy thought process about the art I wanted to make, but now I'm trying not to think about it too much. I'm relying more on my instincts."

Amado says if he remains free of cancer symptoms, he expects his doctor to declare him in total remission by March. Meanwhile, he is preparing for a solo show at Ruiz-Healy in April and he will be teaching classes at the Southwest School of Art. One of the first San Antonio artists to be selected for a residency at Artpace, Amado has an MFA from the University of Texas at San Antonio and recently had a sculptural piece, Me, We, purchased by the Smithsonian Museum of American Art.

Ramirez is represented by his large-scale photographs of battered piñatas, including the severed head of Mickey Mouse and a teddy bear with its genitals ripped out—maybe not exactly in the holiday spirit but the damaged toys reflect Ramirez's tender, poignant view of society's outcasts. Ruiz-Healy is the exclusive representative of Ramirez's estate and organized a special solo exhibit of his works last fall at the Blanca Berlín Galería in Spain. Ruiz-Healy is also lending work for "Chuck Ramirez: Prematurely Discarded" opening January 22 at the Octavia Art Gallery in Houston.

Ruiz-Healy had a show by Cassie and partner Ethel Shipton during the fall and recently sold works by each to the Linda Pace Foundation. In "Aesthetic Encounters," Cassie plays off the adage about a glass being either "half-empty" or "half-full" with the minimalist drawings Temperance (full) and Temperance (empty). His subtle sense of humor also shines in his mixed-media sculpture, Lift, made up of two opposing ramps painted silver and gold.

Among the most beautiful works are Lester's mixed-media drawings of plants manipulated by humans, especially Mutant Generate, which almost subliminally reveals the hazards of bioengineering. But most intriguing are her drawings using carbon paper, Imitatio Perfecta 1, 2 and 6. Each features the original, reverse-negative drawing of a composite plant on carbon paper mounted next to the perfect carbon copy, provoking a "chicken-and-egg" debate about which is better.

A giant blue horse runs across the Southwestern sky in Armendariz's Tlazolteotl as a Horse (Aztec Deity of Midwives), an impressive oil painting on carved plywood.

The grandson of the famed Mexican muralist Diego Rivera, Alvarado-Rivera mingles Latin American magical realism with a colorful, cartoonish style in his sly still lifes, such as the green and purple Carambolos (Star Fruit) and a string of multicolored fish in Pescados Varios. While Ruiz-Healy is establishing its reputation with low-key conceptualists, representational drawings, prints and paintings still have a place in the city's newest contemporary gallery.