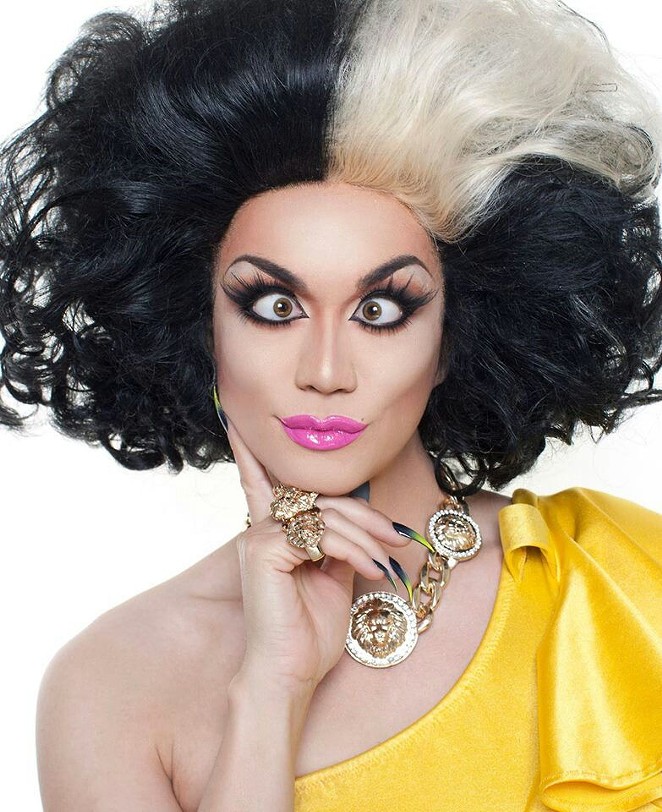 Serving up a winning blend of old-school sophistication, outré glamour and campy theatrics, Manila Luzon sashayed her way into our hearts and living rooms on the third season of RuPaul’s Drag Race, where she joined the polished clique the Heathers (alongside fellow contestants Raja, Delta Work and Carmen Carrera) and ultimately finished in second place, making her “America’s Next to Next Drag Superstar” (as she touts on her Twitter profile).

Born Karl Westerberg in Minnesota and named in honor of her Filipino heritage (Manila being the capital of the Philippines and Luzon the country’s largest island), Luzon boasts a background in graphic design and brings conceptual artistry to her drag craft, donning blond-streaked black wigs reminiscent of Cruella de Vil, cartoonish, cross-eyed expressions that recall slapstick and vaudeville, and amusing getups inspired by everything from carrot cake and popcorn to Imelda Marcos and Jessica Rabbit. (Luzon’s interpretation of Donna Summer’s “MacArthur Park” in a Big Bird costume is counted among the most memorable lip-syncs in Drag Race herstory.)

Since her initial turn on the Emmy-winning series back in 2011, Luzon has remained poised in the spotlight, returning for a short-lived stint on the inaugural season of RuPaul’s Drag Race All Stars in 2012, venturing into the realm of music videos (“I don’t consider myself a musician at all … I consider myself more of a video artist and the music is a soundtrack,” she told the Huffington Post in 2015), appearing in commercials and print ads (for Orbitz, Absolut Vodka and Nine West) and currently lending her diverse talents to “all types of events including weddings, bachelor parties, birthdays and divorces!” Currently competing on the fourth season of All Stars, Luzon returns to San Antonio for two performances at Heat with local support from snaggletoothed emcee Tencha la Jefa and the Rey Lopez Entertainment Showgirls.