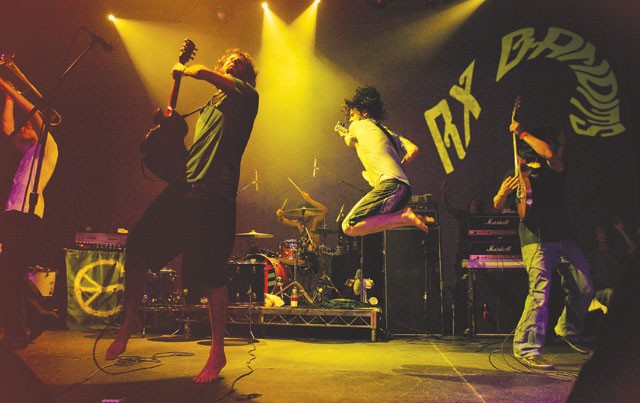 To hear Steve Choi of RX Bandits tell it, there was never a proper sit-down about changing the sound of the SoCal third-wave ska group formed in 1995. There was no mission statement, no formal realization, no heady, late-night conversation over a bowl and brews.

“It was just this unspoken thing where it wasn’t about ska anymore,” the RX guitarist said in a phone interview just a few days before heading out on tour. “It was about deliberately pledging dis-allegiance to any genre and playing whatever the hell we wanted to.”

The change wasn’t so apparent on 2001’s Progress, but just the title of 2003’s The Resignation signified that the band was aiming for a paradigm shift, as if surrendering themselves to their latest inclinations, even if doing so might shake up their foundations. They were listening to Joan of Arc, Refused, At the Drive-In, and “always-and-forever for us, Fugazi,” Choi said.

“That’s a song I wrote modeled after a flamenco concerto by Federico Mompou,” Choi said.

Since that time, RX have delivered two more albums derivative of heavy punk rock that incorporate a wealth of other styles, including dancehall, Latin, jam, psychedelia, glam, and jazz. One YouTube comment under the video for “Hope is a butterfly, No Net Its Captor” from Mandala reads, “It’s like Mars Volta had sex with Muse.”

When Choi joined RX a decade ago, he was itching to incorporate the musical experiences of his childhood. He began playing classical piano at four, cello at nine, joined youth symphony at 10, played bass in a jazz band at 12, and fell in love with both the electric guitar and Nirvana in his teens. Being in a hip local ska band with an established base was great, but he and his bandmates were interested in trying something more eclectic by ’01. Breaking out of that did not go easy.

“There’s a lot of years in that transition before we were able to break out where we were alone,” Choi said. “No new people would listen to us because they thought we were a ska band. No people who liked us before wanted to listen to us because we weren’t what we once were. Brick by brick, show by show, broke-ass day after broke-ass day, [we] just kept at it because we loved it.”

For every fan baffled by how many notes they were playing, RX Bandits eventually gained someone else appreciative of their new creative venture. “Thank you, to those people,” Choi said.

After five increasingly eclectic albums and 16 years on tour, RX Bandits announced on April 12 that their 2011 summer tour would be their last. Choi clarified the band’s status as going into “indefinite hiatus.” Strangely, he’s quite casual about it, as if he’s not closing out a legacy.

“I’m having the same anxiety I normally have for any tour, really,” he said. “For leaving your bed. Leaving your home. And your friends and family. It’s not set in stone that it’s our last tour forever. We have some plans to do some last shows overseas, as well. None of that is totally solidified, but there’s a good likelihood that they’ll be happening after this U.S. tour. I’m feeling excited about it, too, because it’s fun to go out there and play some shows.”

Choi extolled the growing experiences of being on the road, of broadening his worldview and building relationships with fans. But the few cons — particularly creating big gaps in his relationships with friends, family, and his “very loving girlfriend”— are enough to make both he and the band look forward to new musical projects at home. He wouldn’t go into specifics, but he told fans to “keep their ear to the ground” because the RX Bandits aren’t quitting music and fading into obscurity.

With all that said, the Current asked him what message he’d like to immortalize in print to his bandmates, looking back on 16 years together.

“[Our career] is a real testament to the connection that we have to each other,” he said. “To have accomplished so much and still have the level of respect that we do for each other. I really appreciate how different everyone is. Everyone else in the band has always helped me grow. We’ve all helped each other grow.” •