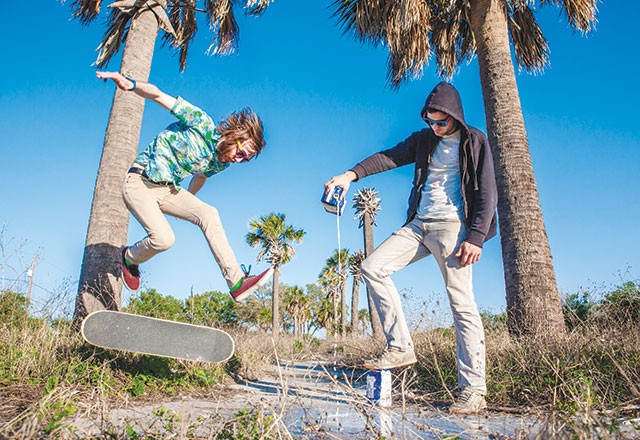 In November 2011, at the now defunct Studio 13 Hookah Bar, Feuding Fathers opened for their math rock idols Tera Melos and “we fell on our faces,” according to drummer Mason Macias. The thorny, complex outlines of their tunes required a high level of communication and the early pressure proved too much for the trio to handle.

In the years since, Feuding Fathers is a changed band. They’ve forgone a bass player, tightening up to the pair of Macias on drums and guitarist/vocalist Dustin Coffman. After losing their bassist Joe Raines, Macias told the Current that they “thought about getting another bass player, but we found it to be a lot easier, just me and [Coffman].” In the live setting, the duo picked up some new toys, too. “I started using an in-ear monitor,” said Macias. “I send Dustin’s guitar signal to my earbud. We face each other too, so we can see where we’re going with it. We can make a lot more decisions quicker.”

With their maze of guitar ornaments, fret taps and tricky licks, quick thinking is vital for Feuding Fathers. Their music rarely sticks to a chord structure for longer than 30 seconds, flipping through riffs like an attention deficit tour through a television’s channels.

As a drummer, Macias is up to the challenge of keeping the music on track. “Dustin doesn’t work with a metronome at all,” said Macias. “At first it was very different, I was used to structure and where the pulse of things was. With his playing, I couldn’t really find it. A lot of times I’m trying to find some kind of accent to follow. In a way, it’s hard ’cause from one section of a song to the other it could change entirely. In another way, it’s liberating. He’ll make something so profound and complex and I can’t just do something simple with it. I want to try to push myself as well.”

On their new record Kid Tested, Father Approved, Macias’ drumming vibes off of Coffman’s six-string work, boosting the impact of the guitarist’s nonstop parade of runs. Kid Tested is a dense listening experience, but it’s to Feuding Fathers’ credit that it rarely feels so. “We were trying to simplify certain ideas so it’d be less stop-start than most math rock,” said Macias. “We tried to simplify and add some craftsmanship.”

You may not be able to hear it, but a lot of classic rock influences went into the writing of Kid Tested, Father Approved. “Listening to Paul Simon helped us especially on the record. We put everything we had into writing,” said Macias. From an outside perspective, it sounds nothing like “Me and Julio Down By the Schoolyard,” but as you hone in, a strong internal logic of traditional songwriting grounds the album.

Feuding Fathers’ music is the type where genre descriptors fail. Post-rock is way too broad and though the band evokes progressive rock at times, their recorded music rarely stretches out long enough to be classified as such. Math rock gets close with its dissonance and complexity, though the name suggests a cold emotional distance that doesn’t resonate with their expressive affront. Rather, Feuding Fathers’ music is loud, high energy, complex and fun, like the ideal first date. Let’s leave it at that.