But a new craze crossing the nation has adults putting down smartphones and laptops in exchange for coloring books. Long considered the territory of 2- to 8-year-olds, thousands of grown-ups around the country are channeling their inner child in a good way, that some say reduces anxiety and stress.

Adult coloring has become so popular and mainstream that on Amazon, at the time of this writing, five of the top 20 best-selling books were, you guessed it, adult coloring books.

Blue Star Coloring's stress relieving series has even topped the list of Amazon best sellers and has consistently remained in the top 20. The company's books cover everything from psychedelic designs to animals to anatomy. 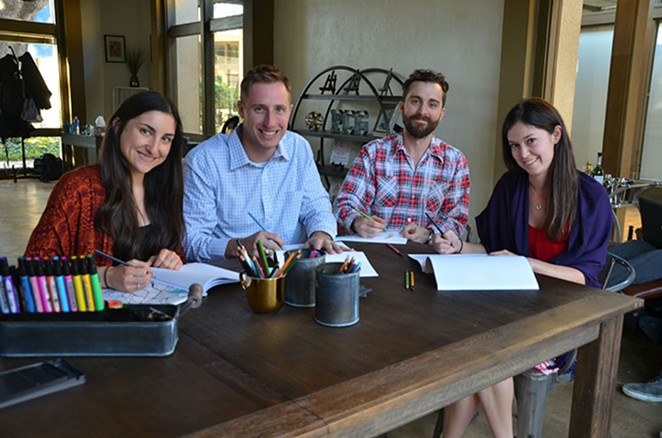 "That was kind of surreal. It took some hard work, but there was a lot of luck. This all happened early on. There's a lot of people who are extremely talented writers, artists and publishers who never get that milestone," Hendricks said, while sitting at a table with an assortment of markers and colored pencils awaiting eager hands, at Blue Star Coloring's Alamo City headquarters. "So, yeah, it was really cool, but it's also humbling in a lot of ways."

Hendricks' "Aha!" moment came during a conversation with his wife, who is a pediatrician in residency.

"She mentioned that they had been talking about coloring and stuff and how it's stress relieving. They work like 80 hours in a high-stress environment," he said. "It was already a thing. We didn't invent it."

However, unlike some of their competitors, artist recruiter Brenna Dominguez says Blue Star Coloring's designs are all hand-drawn by independent artists.

"We have one in Corpus Christi, one in San Antonio, one in Dallas," Dominguez said of Texas-based artists working with the company.

Alamo City artist Abe Vasquez, who is primarily an oil painter, illustrated the first book, Form, in Blue Star Coloring's upcoming new Master Editions, which are hardback books with higher quality paper that are meant to be displayed like coffee table books.

"It's predominantly our bones and muscles that give us our physical shape so I wanted to present them in the most expressive and tasteful way as I can through the medium of a coloring book," Vasquez says of Form, which should be released sometime in February. "I hope people enjoy the illustrations and enjoy coloring them in their own way and perhaps learn a bit more about the beauty of our [physique]."

While the explosion of all things adult coloring took the country by storm in 2015, like Crystal Pepsi, Surge or parachute pants, trends come and go.

That's something Hendricks said he was cognizant of before deciding to take a foray into the wide world of adult coloring.

"People don't do it because it's cool or popular, like styles of hair and clothing that go in and out of style. This is something that people can do at home on their own," he says, adding that there is a large online community of coloring book enthusiasts.

While questions like how much he was willing to invest or whether getting into the coloring book business used to weigh on him, seeing that there is a community has reinforced his belief that this isn't just another trend.

"I don't worry about that at all," Hendricks said.

"If you told me three years ago that it would take off [I wouldn't have believed it], but it is very popular," Chiego says, explaining that she often sees library staffers toting their own coloring books.

And the Central Library's new adult coloring program is already making a splash.

The San Antonio Public Library's fledgling activity time invites adults to relieve tension or anxiety while unlocking their creative potential at the library.

She believes coloring has become so popular because it provides a break from the technologically saturated 21st century where working professionals are often bombarded with decision after decision for work and home life.

"People are so into it because it's relaxing," she says. "I'd call it decision fatigue."

That jives with feedback Blue Star Coloring has received from its customers, who have also told them that coloring has helped with a host of remedies, including alcohol recovery, PTSD, getting troubled kids to open up to someone and helping people stuck in hospitals pass time.

This all begs the question: Can adult coloring relieve anxiety, stress or any other maladies?

Deb Murphy, Texas spokeswoman for the American Art Therapy Association and an art therapist, is skeptical.

"Most people default to their own experiences with art when they try to define what I do. These perceptions are most often way off base," she says. "Adult coloring books, Sudoku, puzzles and the like all serve to calm the anxious or busy mind. [There's] certainly nothing wrong with that, but [it] has little to do with art therapy."

Murphy said that, hopefully, the good that comes from coloring books, is that people yearn for something more "and find the real pleasure in creating art from their own imagination without self-judgment."

University of the Incarnate Word associate professor of psychology Stefanie S. Boswell, whose thesis and dissertation focused on expressive interventions for grief, said it's wonderful for individuals to select an expressive approach to coping with a negative effect that fits within their worldviews and lifestyles.

"There is a limited amount of research focused specifically on coloring designs; most of the research is on the broader approach of art therapy," she said via email. "During art therapy, individuals express their thoughts and emotions through their own artistic creations (rather than color designs generated by someone else)."

However, a handful of studies that focus on the effects of coloring complex designs find that it's likely inducing a meditative-like state that can reduce stress and anxiety, Boswell said.

But does it really help people who suffer from PTSD or people recovering from alcoholism?

"There is, however, a growing body of research about art therapy for the treatment of PTSD in both children and adults," she said. "Several of these studies have found different art therapy interventions to be helpful."

But, if coloring has its effect through creating a meditative state, "then the growing body of research on meditation in the treatment of anxiety, depressive, and trauma- and stress-related [disorders] suggests positive outcomes if coloring were to be studied in these individuals."

Nonetheless, people like coloring. Just like how the Central Library's Chiego says she notices her staffers toting coloring books to work, and like how most Blue Star Coloring employees have picked up coloring habits since the company's March 2015 launch, Boswell's students, too, have a fascination with the coloring craze.

"A couple of students with whom I work closely were talking the other day about how many news stories they saw about coloring over the semester break," Boswell said. "They are both very research-minded so the conversation quickly turned to questions of 'Is there evidence to support the buzz?'"

That's best left to the experts.

As for us regular busy-bodies, we might as well sharpen our pencils and take to our favorite designs, because regardless of the psychology behind coloring, any way to tune out of the smartphone-saturated world for awhile and drift into a stress-reducing state is a good thing.

So color away and leave the research and science to the professionals.