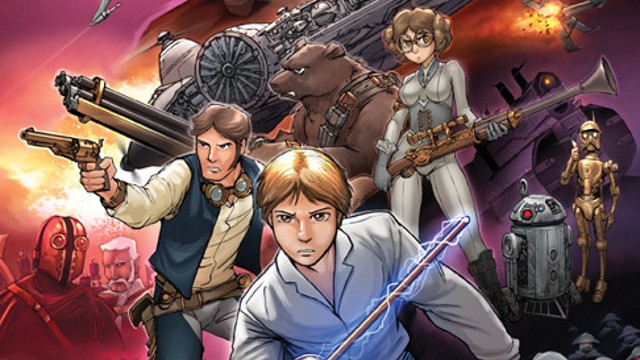 “Not so long ago, in a galaxy relatively close by

San Antonian comic writer Fred Perry both authors and illustrates the series. Perry got his start in comics in the 1990s when he submitted some of his work to Antarctic Press, an indie comic book publisher in San Antonio. Last year, he won the prestigious Inkpot Award, an honor bestowed upon select comic artists during the San Diego Comic Con. Previous winners of the Inkpot Award include Stan Lee and Charles Schultz.

Steam Wars takes what most fans of Star Wars know about the franchise and gives it a stylish makeover. Sci-fi style is replaced by steam punk sensibilities. There are no Jedis or lightsabers in Steam Wars; instead, readers get a Quantum Dragoon who wields an electric sword. The art is drawn in a distinctly Japanese comic book style. He does the layouts for the whole book before penciling and scripts the dialog after each page is complete.

“At first, it was just something cool to put in the ‘Summer Fun’ steam punk anthology. But soon it took on a life of its own,” Perry says in a recent interview.

Perry also drew inspiration from other sources than Star Wars to create Steam Wars, including Clint Eastwood films, World War I, and theories of quantum physics.

A graphic novel, compiling issues one through five, is slated for release this November.