S.A. Delegation Tears Into Trump Over His Helsinki Press Conference 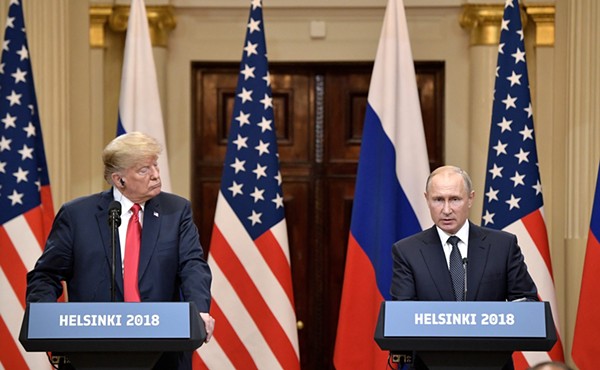 The reviews of President Trump's performance at the summit with Russian strongman Vladimir Putin are in. And let's just say the ones from San Antonio's congressional delegation are on the green-and-squishy end of the Tomatometer.

Using the #TreasonSummit hashtag, U.S. Rep. Joaquin Castro described the president's kowtowing press conference as "an act of treachery against the American people."

No President has ever looked weaker, more apologetic and less American standing next to a foreign leader than Donald Trump did next to Vladimir Putin. #TreasonSummit

U.S. Rep. Will Hurd, a member Trump's own party, unloaded on the reality show star-turned-president in tweets that highlighted his own background as a CIA officer. "We should not start trade wars with our allies and play nice with communist tyrants," the Republican congressman said.

I've seen Russian intelligence manipulate many people over my professional career and I never would have thought that the US President would become one of the ones getting played by old KGB hands.


U.S. Rep. Lloyd Doggett, a Democrat, tweeted with an attached press statement that blasted Trump for his inability to call out Putin's numerous toxic actions on the world stage.

"[Trump] appears totally impotent in the face of Putin," Doggett said. "In the struggle to preserve the free world, Trump proudly yields right of way to the oppressor. In all of Trump’s tweets, attacks, and insults, the one person he routinely praises is a ruthless dictator: Vladimir Putin, who poisons his enemies, invades Ukraine, facilitates war crimes in Syria, and disrupts democracies."

"It is troubling that our President sees an equivalency between the unbiased and qualified expertise of our intelligence community and the personal word of Russian President Putin," Cuellar said. "President Trump’s disregard of our intelligence is a disservice to the American people and greatly undermines our Democratic values.”

Sen. John Cornyn didn't tweet his assessment. Instead, he told CNN that senators may put together a nonbonding "sense of the Senate" resolution to register objections with Trump's statements during his jaw-dropping news conference with Putin.

"I don't think we should be taking a former KGB colonel's word for what their intelligence apparatus is doing or not doing," the Senate Majority Whip said. "I believe our intelligence community."

As of this morning, Republican Sen. Ted Cruz's Twitter feed was absent of any mention of the summit. Retiring U.S. Rep. Lamar was also silent on Twitter, this morning retweeting a link to a statement he delivered called "The Future of Fossil: Energy Technologies Leading the Way."

This President has turned his back on this country, on our democracy, on accountability and justice for what happened in 2016 and what we face in 2018.