June 16, 2014
comment
This week leading up to Father's Day and Game 5 for the Spurs, SA locals and friendly tourists kept themselves satiated at a variety of restaurants and cafes.

Remember to use #SAfoodpics for your 15 minutes of fame on our blog.

@cristinagiselle said "Just a lil almond milk latte pick me up." (via)

@venegasstudios proclaimed that she was about to chow down on a "3 cheese grilled cheese, and mixed veggies." (via)

@wanderlustpie said "Check out my mug." (via) 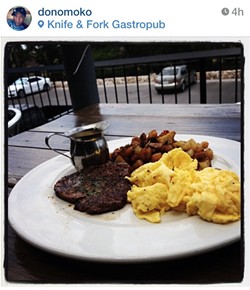 While at Rosario's, @teelawalk had a "Prickly Pear Margarita." (via)

While at The Luxury @stevensjessy said "Sharing my beer with this guy." (via)

@vodomeier said "Decaf pour-over. Getting back to checking out all the new establishments opening up near the Pearl." (via)

At Big Lou's Pizza @simplymaritssa said "Friendship and pizza!!" (via)