Keep hashtagging your best food pics with #SAfoodpics for a chance to be on the blog.

While chowing at Pappasitos Cantina (10501 Interstate Highway 10) @bella_cantstopsmiling said "dinner with my boys..." (via)

It was at The Monterey (1127 S St. Mary's) where @tx_sophie said "Summer squash ratatouille with jalapeño, pork belly and menudo broth. Slap an easy egg on it for good measure.." (via)

@haleylasourd said "The end to a successful day!" (via) 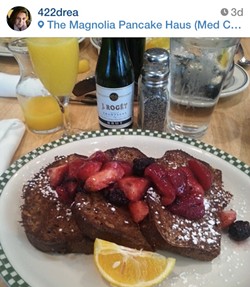 Before @422drea snapped this shot at Magnolia Pancake Haus she said "#sopretty had to take a picture." (via)