SA Man Responds to Racist Meme of His Sikh Friend 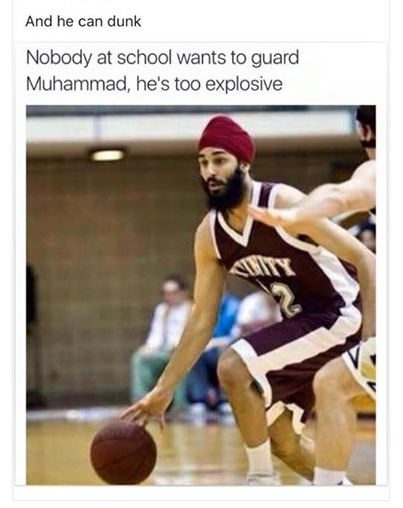 Talk about some bullshit.

There's a meme floating around that targets Trinity alumnus Darsh Singh, who is a Sikh, and the first turbaned player in NCAA history.

One of Singh's friends came across the meme, and responded in the best way possible.

Let me tell you why this shit isn't funny. I know this guy and his name's not 'Muhammad.' He's not Arab, he's Punjabi. He's not even Muslim, he's a Sikh. His name is Darsh Singh and he's a US citizen, born and bred. That jersey he's wearing in this pic, it currently sits in a Smithsonian Museum in Washington, DC because he made US history as the NCAA's first turbaned Sikh American basketball player for Trinity University in my hometown of San Antonio. He was co-captain of that team when he played there. He's worked in US Intelligence with the National Security Agency in the past and currently manages financial portfolios and hedge funds for some of the most compassionate companies in the US. Above all those things, he's a really nice guy, very funny, and he's a great friend of my younger brother whom I was more than happy to befriend myself.

People need to understand, this stuff hurts people. You might think it's funny but that's mainly because you don't know the guy. Perhaps if you did, then you would see this differently. But even if I didn't know Darsh, I still wouldn't think this was funny. Why? Because things like this pic teach people to be afraid of those who are different than you. What you might not know is that Sikhs have a history in the US and abroad of being mistaken for being Muslim and thus being accused of terrorism. This usually leads to them being attacked and even killed because someone stupid thought they deserved to be beaten, injured, or killed because of their religion. But even if he was a Muslim or if he was Arab, this still doesn't make the joke okay and it still doesn't give you reason to believe that person is inherently evil or that they deserve harm.

Do the world a favor and educate yourself. Get to know people who are different than you and learn about them as much as you can. Knowing one or two or even 15 people different than you is not enough. You need to be networked with groups of people who are not like you to begin to truly understand just how much this stuff hurts people like Darsh. And because I know almost everyone in my Facebook feed will never get to know him, I'll post some links so you can learn about him yourself.