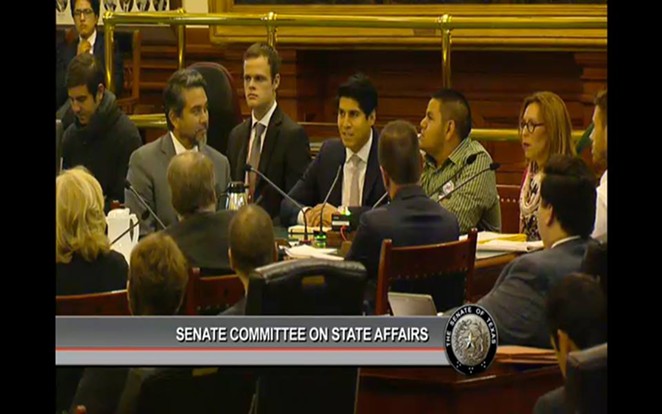 The City of San Antonio has said, about as clearly as it can, that it is not a so-called "sanctuary city" that refuses to cooperate with federal immigration officials.

The city has however become one of the louder voices decrying the movement forming in Austin to crack down on sanctuary cities, which Gov. Greg Abbott dubbed an "emergency" item for the session and fast-tracked through the legislature this week. At a state capitol hearing on Thursday, San Antonio city council members, the city's police chief, and even the local county sheriff all testified against the measure, saying it would tie the hands of local law enforcement.

San Antonio Police Chief William McManus, in his testimony before the senate's state affairs committee, largely echoed what he said in a panel discussion at UTSA last week: this bill could hurt local law enforcement efforts, even in cities that don't consider themselves a "sanctuary." McManus told the committee he still had "serious concerns" with the bill, saying he feared it would "distract us from our primary mission" — which is to solve and prevent local crime.

As we've previously reported, regardless of whether the city calls itself a "sanctuary" for undocumented immigrants, the San Antonio Police Department still has policies on the books that clash with Senate Bill 4 — like SAPD's policy directing officers not to ask people for proof of citizenship or legal residency in routine police encounters. Under the bill senators debated on Thursday, SAPD would have to rescind that policy or face a possible loss of state funding if it decides to keep it. This week, senate Republicans added college and university campus police departments to the list of agencies that would be required to cooperate with federal immigration enforcement efforts.

While the bill's Republican author, state Sen. Charles Perry, insists his concern is rooted in "the rule of law and keeping our communities safe,” McManus argues the bill would do just the opposite in a place like San Antonio, alienating the city's large immigrant community and making people even more reluctant to report crime and work with local police. Along with McManus, the senate committee also heard testimony against the bill from SA city council members Rey Saldaña, Roberto Treviño and Shirley Gonzales, as well as from Bexar County Sheriff Javier Salazar.

Security was tight around the senate gallery Thursday as guards confiscated signs and banners protesters of the bill brought with them to the capitol. People were occasionally removed from the gallery for shouting or waving signs, and while committee chair Sen. Joan Huffman said numerous times she'd remove the crowd and clear the gallery, she never actually followed through on the threat.

After hearing some 16 hours of testimony on Thursday, the senate committee voted 7-2, along party lines, to send the bill to the full Senate, which is expected to take up the measure next week.