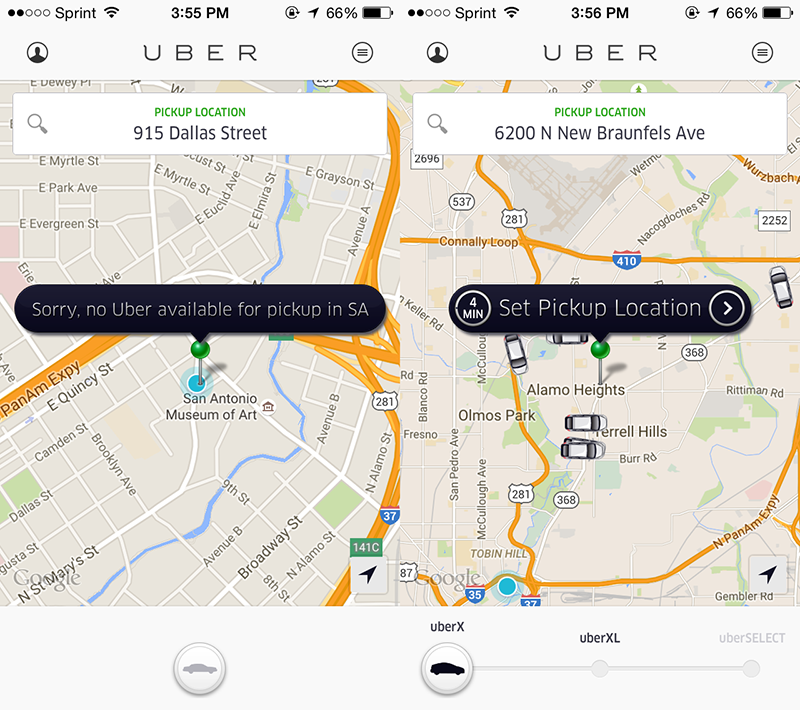 Roughly one-third of that territory is covered by San Antonio, a spreading metropolis that presents a challenge for folks in the business of giving others a ride.

For Uber drivers — Lyft is no longer operating here — working smaller cities like Alamo Heights, Windcrest and Terrell Hills is hardly worth it.

The San Antonio Current spoke to a ride-share driver and a rider who frequents the service. Neither wanted their names used for fears of reprisal.

The driver used to work for Yellow Cab, but left the company years ago. When Uber and Lyft started operating in San Antonio, he jumped at the chance and became a full-time driver for both companies.

But since San Antonio passed its ride-share regulations prompting Lyft and Uber to leave town, the driver said he's looking north to Austin and said some drivers he knows even go as far as Houston for gigs. And they're all making more money.

"Business was never great in San Antonio. Certainly not compared to Austin," the driver said, via a hands-free device on Interstate 35 while stuck in a traffic jam south of the Capitol. "You can't pick anyone up at the airport or downtown (in SA). That just really killed us. It just wasn't worth it."

But not everybody's quite ready to give up on SA.

Uber General Manager Chris Nakutis said multiple jurisdictions create a confusing regulatory environment, but there is any easy way to understand where Uber can legally operate in Bexar County.

"It's everything that's not San Antonio," Nakutis said.

San Antonio Police Department spokesman Sgt. Javier Salazar said drivers can pick up passengers in other municipalities — like Alamo Heights, Terrell Hills, Olmos Park and Windcrest — allowing the service to use SA streets and even drop them off within SA limits.

But the originating pick-up point cannot be in SA.

As if that sounds confusing enough, add loopholes to the mix and you get a rather messy situation.

Ordinances and policies are one thing — enforcing them is another.

Some SA riders get around the problem by initially calling to get picked up in one of the Uber-approved municipalities, only to call in at the last minute with a change of plans.

"So if you are in an area where Uber doesn't run, you can't pin yourself. So it will show no car," said a rider who spoke to the Current on the condition of anonymity. "But you can change your pin. And so what I do is I pick the closest area that they still pick up at and pin myself."

Then riders call the Uber driver, indicating their actual location hoping the driver will still agree to pick them up.

It's a gamble and it doesn't always work.

Nakutis, Uber's general manager in Texas, said he hadn't heard of the loophole.

"If drivers are using the platform in a way that is not intended, then we would remove them from the system," Nakutis said.

The ride-share driver that spoke to the Current said the issue is widely known — not that he cares for it.

"It's just not worth it because you're getting a lot of dead miles. And those are the miles you drive to pick up and you don't get paid," the driver said. "And then if they call and say 'I'm two or three miles away,' you have more dead miles."

Salazar said no drivers have been cited since the ordinance became law in April.

The rider interviewed by the Current would still rather take a gamble on Uber in San Antonio before calling a cab.

The rider was arrested for DWI a couple years ago and is passionately against drunk driving, even using spare time for nonprofit work to raise awareness about the dangers of drunk driving.

"If go drinking, I don't want to worry about killing someone," the rider said, adding that Uber drivers are typically friendlier and more helpful than cabbies.

"I've left stuff before and not gotten it back (from cabs) ... I lost a DVD a friend had given me and the Uber driver took an extra trip to give it back to me," the rider said.

So did Uber and Lyft have enough reason to leave SA? The driver we spoke to didn't think regulations were as strict as the ride-share companies have made them out to be. The driver didn't have a problem with insurance requirements or criminal background checks.

"The city bent over backwards and, really, all they wanted was better insurance because the insurance Lyft and Uber offers sucks so the drivers have to lie to their insurance companies," the driver said.

Lone Star State legislators did consider a bill that had ride-share support, but it didn't go anywhere.

"They don't realize that Texas politics isn't California politics," a dig at the ride-sharing services' headquarters.

Nakutis said Texas had a good bill that would have allowed ride-sharing and ended jurisdictional issues for the company, like the ones it faces in Bexar County.

"But unfortunately, anti-competition lobbying slowed that down," Nakutis said.

So it's hard to see how Uber would support Ivy Taylor, who backed the ordinance regulating Uber and Lyft.

The other candidate in the running, Leticia Van de Putte, has said the way the city handled the issue was embarrassing — leaders need to embrace, not reject, disruptive technology.

It all adds for more potential conflict on the ride-sharing front. The Uber driver who spoke to the Current said enough is enough:

"Austin just destroys it. I'm probably going to move up here just because the business is good."