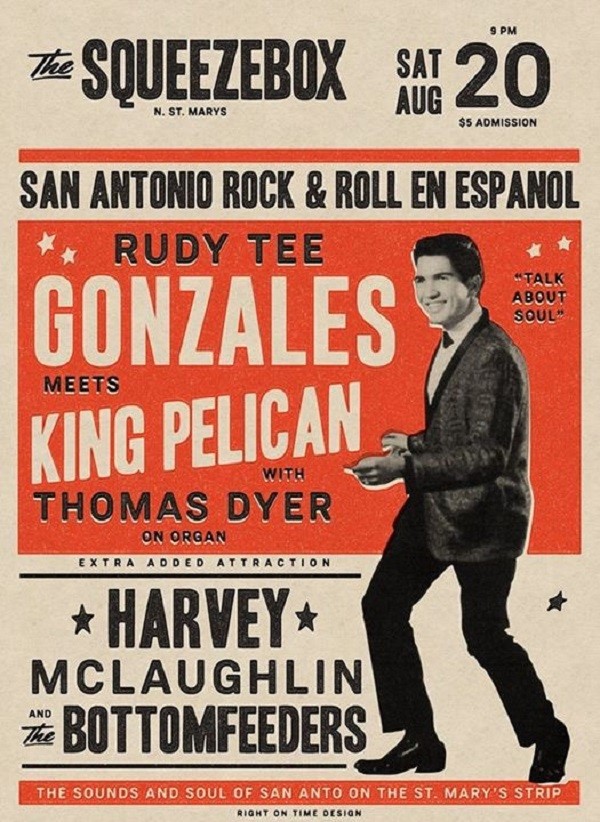 Have you been to The Squeezebox yet? The new-ish little cantina on El St Mary's Strip has fast endeared itself to many San Antonians (including us) with its no-frills gravel/picnic table patio, its respectably dingy-chic (and dark) dive interior, its noticeably diverse clientele, and (especially) its music.

The Squeezebox, at its best, hearkens back to bygone San Antonio hang-outs (of the 1950s, 60s, and early-70s) that, coolly and accidentally, almost, drew kickers and vatos, flat-tops and mop-heads, boozers and stoners, crooners and screamers, bikers and debutantes, diggers and hangers-on, lovers and fighters, and everyone in between. This smorgasbord of humanity would gather for cold longnecks and music that somehow satisfied their multi-varied senses of the ineffable (unachievable?) ideal scene they all (in their own ways) pined after. Great bands and unique sounds were born from this commingling, this cross-pollination, but so were important movements, empowering connections and bridges, and a whole bunch of absolutely beautiful mixed-race babies. 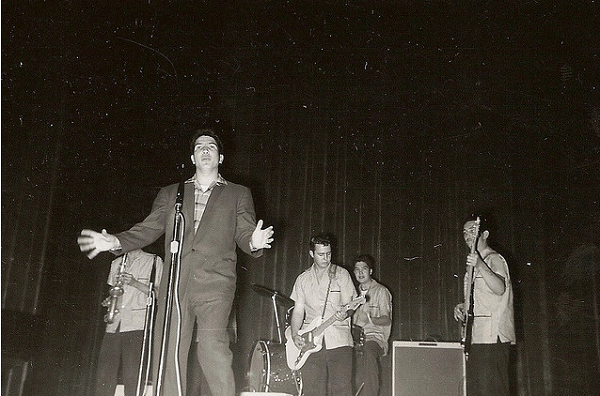 Whether you call it Westside oldies, rock 'n' soul, or cruisin' classics, Gonzales' music is a timeless and touching reminder that, not too long ago, being outwardly emotive in song was the most macho thing you could do. In the great American/Mexican tradition of cry-singing (see John Jacob Niles and the Mexican ranchera and corrido styles), Gonzales' appeal arises from (in part) his ability to move listeners (emotionally and physically). But, his tunes, fantastically new hybrids in their time, are also arresting for their compositional excellence and their historical magnitude (besides just being damn enjoyable to listen/groove to). Recent interest in Westside musical luminaries (like The Royal Jesters and Sunny and the Sunliners) has helped coax Gonzales into a renewed interest in sharing his songs live.
To gain more perspective on this show, which follows up a few other out-of-town dates by the Gonzales/King Pelican collaboration (billed as Gonzales y los Pelicanos del Rey), the Current spoke with King Pelican guitarist Ernest Hernandez. 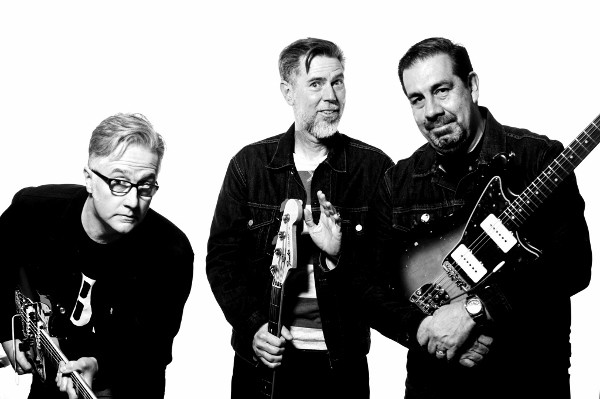 Hernandez explained that the collaboration came about as a result of conversations with Jason Saldana (aka DJ El Westside Soundsystem).


[Saldana] approached me about the idea in late 2015, early 2016.
Jason had already been working with Rudy T on booking and promoting shows, including a very successful trip to the Ponderosa Stomp in the Spring of 2015. Jason also knew about King Pelican and what we do... and yes we are a surf band, but I think he picked up on the fact that we have a lot of Chuck Berry, Link Wray, Little Richard... basically early rock 'n' roll in our sound. Jason was on a quest to get Rudy T's earliest tracks (late 50s/early 60s Chicano Rock) recognized and performed again and felt we were the right band to back him: the right chops and the right grit.

So we got together and ran some early Rudy T tunes like "Cry, Cry", "Do the Jerk," and "Talk About Soul," and man it was solid and real. And no, it didn't sound like "old man" rock... it had the edge of early rock 'n' roll, rockabilly and early 60s garage. Next came a couple of shows including a showcase at ABGB during SXSW and a gig at famed Austin Blues spot Antone's. And now, finally after a lot of requests and chatter we have a show booked in SA.

And, even though we love playing together, King Pelican keeps pretty busy so it has been a bit of challenge to book gigs, so we'll have to see what the future holds in regard to other shows. But, we definitely are talking about a recording project featuring Rudy's earliest tunes.

We can only hope the newly-minted group feels the pressure of San Anto's excitement about this project and makes good on that possible studio work. But, until that day comes, let's all agree that this show is the place to be on Saturday night. Speaking of the experience of working with an icon like Gonzales, Hernandez had this to say:


Anytime you get a chance to collaborate with a legend like Rudy T, you do it! It's an important element of your continuing education as a musician. And, for me, being a San Antonio native, born and raised in Southeast SA, and as a student of early American rock 'n' roll, this has been an amazing opportunity. Playing the music has been awesome, but the stories that Rudy shares about his early rock 'n' roll experiences performing and recording in South Texas, the Southwest and Mexico are priceless.$5, 9pm, Saturday, August 20, The Squeezebox, 2806 N St Mary's.