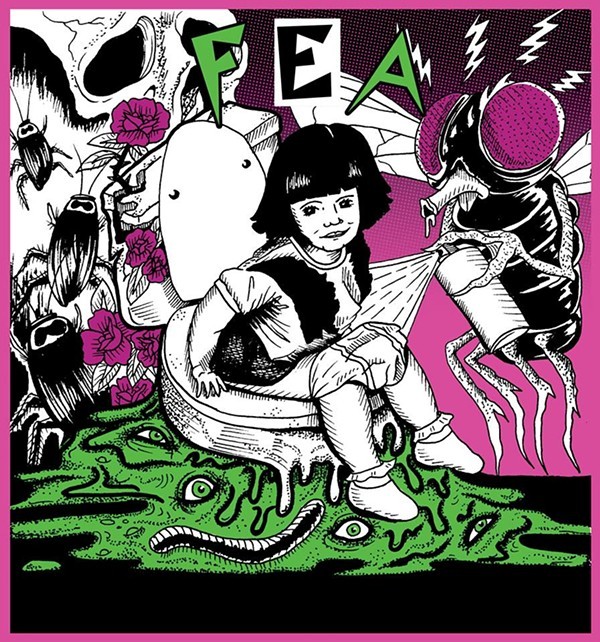 A Google search of “Chicana punk rock” brings up articles of chicano rock, along with several stories about fierce, ballsy chicana punk rocker Alice Bag, member of 1970s punk pioneer band the Bags. Not many other lady-rockers though, much less chicana. Donde están las roqueras?

Some of those chicanas are rocking out in San Antonio’s riot grrrl act Fea. You might even call it neo-riot grrrl, with members like Phanie Díaz and Jenn Alva, (who prefer to be known by their band names, Phanie Fea and Jenn Fea), working partners behind the Bang Bang Bar who met in a middle school art class and went on to form Girl in a Coma (GIAC), hometown heroes who have received both local and national press for their unique sound. Letty "Fea" became front woman and singer for the band after responding to a Craigslist ad from Díaz and Alva. Díaz told us that she, Alva and Letty all grew up listening to bands like Bratmobile, Bikini Kill, The Bags and X-Ray Spex, so they combined their love of that music with their similar, relatable stories of growing up queer and Latina.

Signed to Joan Jett’s Blackheart Records, Fea's album was produced by Lori Barbero (Babes in Toyland), Laura Jane Grace (Against Me!) and Alice Bag. The band's two videos, “Mujer Moderna” and “Feminazi,” highlight Fea's unabashedly potent political message. “Feminazi,” for instance, underscores the idea that feminism isn't about hating men: “Sure we are feminist, but that doesn’t mean we go around hating men and belittle people who don’t see our views,” says Díaz. “We just want equality and to meet in the middle.” Sounds reasonable. And a riot grrrl band’s music video wouldn’t be complete without political commentary on rapists getting off free and scary images of Donald Trump, “because he’s a very, very dangerous person,” Diaz says.

The best thing about Fea is that they’re not just another punk band; they’ve got elements of straight up rock and roll. It's not your typical repetitive punk sound, but rather the band incorporates twists and turns that are heavy, in your face, and captivating. And audiences, from the looks of last night’s Phantom Room show, can't get enough of it. In true Chicana punk fashion, Fea plays for Fea, enthralled by their own music on stage, enjoying themselves without your permission. Díaz says the band's mere existence is bucking against a double standard in music when it comes to women. "[I]t's important to realize that being a female in a band is not a gimmick,” she says. “It's important to showcase this in SA and beyond.”

Fresh off a month-long tour through states like Arkansas, Tennessee and Virginia (the band's second), Diaz says it's also become apparent Fea's giving audiences something they're not exactly used to. In San Antonio, code-switching in literature, music, and general conversation is commonplace. Out on the road, not so much. On tour, Diaz says the audience found it curious that Letty sang in Spanish. Still, people were more more intrigued than combative. “It’s opening up a whole new world to people who probably wouldn’t listen to music with Spanish lyrics,” Diaz tells us.