"I'm glad I made the decisions I made, so I could be dirt-poor white trash and keep it true." – Robert "Bob Dog" Catlin

When I set out to do this piece, I intended to cover a rock 'n' roll show that occurred in 1984. That's it, just one show. The concert happened to be a heavy metal face-off, with local metal heroes, Slayer, pitted against a small underground band from California, also named Slayer. However, as time went by and I listened to the recorded conversation between guitarist and founding member Robert "Bob Dog" Catlin and myself I realized there was a greater dialogue taking place. Bigger than two bands sharing a name, playing a show "against" each other — the local band fading into obscurity and the legal recipients of the "Slayer" moniker rising to be one of the most profitable metal acts of all time — it was a conversation about the heart and soul of rock 'n' roll.

Unfortunately, a band like (S.A.) Slayer, their members and their history deserve much more space than is allotted. So, for that I can only issue an apology. Sorry, Bob. Hope you still dig it.

Catlin has been offered the six-figure contracts. He's played with his heroes, toured with Metallica, been in bands with punk and metal legends; people that have been on posters that adorn the walls of long-haired hesher kids who just want to shred 'til they're dead and for mom to get them a Pepsi, just one Pepsi.

For those who are not aware, San Antonio was home to a band named Slayer, consisting of Chris Cronk on vocals, Catlin and Art Villareal on dual lead guitars, Don Van Stavern on bass and Dave McClain on drums.

"We were real show-offs. The double-lead thing was what really grabbed us by the nut and was probably our second claim to fame after the super high vocals ... That was always part of the formula: double leads, high vocals, double bass drum kit."

Eventually Cronk was replaced by Steve Cooper and Villareal left to be replaced by Ron Jarzombek. Nevertheless, in their short two-year span, Slayer grew to be one of the most popular metal bands in the area, with only one EP, Prepare to Die, released during their tenure.

"The whole Slayer controversy has to do with ... I'd say diplomatically ... mismanagement on Rainforest Records. The EP was finished and it sat waiting to get pressed for six months. In that ensuing six months, the famous Slayer put out their first record. But ours would have come out first and it would have changed everything, but it didn't, so theirs did."

L.A. Slayer, the Slayer that most are familiar with, released their first LP Show No Mercy in 1983, months after S.A. Slayer wrapped up their recording at Bob O'Neill's Sound Studios.

"Once Prepare to Die came out, we were being distributed by Dutch East Indies. That's when Brian Slagel [founder of Metal Blade Records] sent the cease-and-desist stuff to Bob O'Neill. Which, boy, that sucked ... that sucked."

With a lawsuit hanging over their heads and three-fifths of the band joining up with former Riot guitarist Mark Reale to form Narita, S.A. Slayer, our Slayer, decided to call it a day. However, they would join forces one final time to face their lawyer-wielding nemesis in a battle of licks.

By the time of the infamous Slayer vs. Slayer gig, set at Villa Fontana, S.A. Slayer had already been broken up for several months. Catlin, as an employee of Hastings Records in Windsor Park Mall, was present for the L.A. Slayer in-store, and partied with the California band throughout the day.

"Later [that] afternoon, Kerry King looks at his watch and proclaims to his bandmates, 'Well, I guess it's time to go downtown and meet this other fucking Slayer band,' looks me right in the eye and goes, 'What do you know about 'em?'"

"So these guys kind of freak out because they were expecting all this aggro bullshit. But, the fact that I had spent the whole day with them kind of diffused all of that ... and here it is almost [31] years later and people still talk about that gig."

Although the millionaire-Slayer went on to be one of the most revered metal bands in history, Catlin didn't seem bitter at all. He has one thing they will never have, the broke-ass bastion of poor rock 'n' rollers everywhere: street cred. 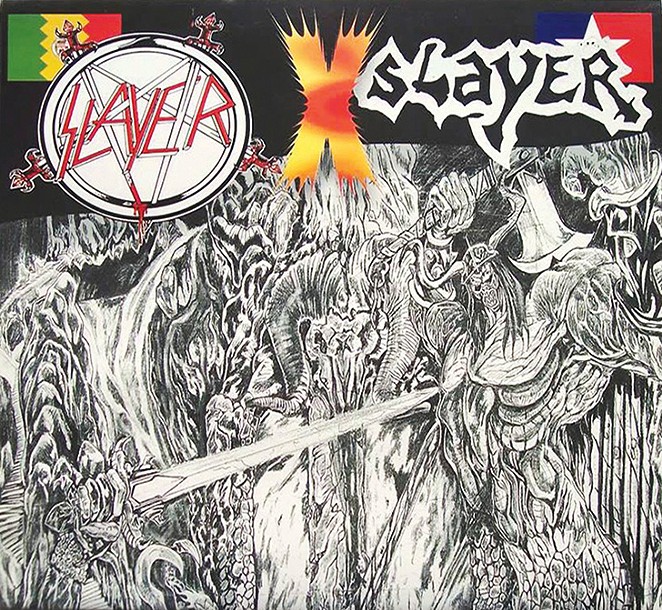 Interestingly enough, there is a bootleg of the Slayer vs. Slayer show floating around, which means somewhere out there are Famous Slayer fans bumping it, deciding for themselves who the real rock gods are. Upon hearing Catlin and Jarzombek's dueling riffs, Cooper's soaring vocals, Van Stavern and McClain's cacophonous gallop, surely, some are banging their heads, declaring, "Shit, dude! Those not-millionaire-Slayer dudes are pretty fuckin' excellent!"