SA Sound: The State of Jazz

With HemisFair on its way to becoming a “jazz park,” Jazz S’Alive in its 31st year and KRTU keepin’ on, Alamo City jazz infrastructure is on the rise, recovering from the loss of The Landing and Carmen’s in recent years. This edition of SA Sound takes a look at some recent releases from the San Antonio players keeping the resolute jazz scene alive.

Ken Slavin’s You Gotta Have Heart

The title of Ken Slavin’s live album doesn’t just refer to the chutzpah it takes to play the Metropolitan Room in NYC, which he did for the recording of You Gotta Have Heart. In the summer of 2013, Slavin was batting three for four in blocked coronaries and underwent surgery to get things back to tip-top. As documented on You Gotta Have Heart, Slavin’s heart is healthy and his voice booms through the album’s 16 standards.

Like a comedian careening through a familiar joke, Slavin has incredible control over the pacing and melodic intricacies of the best pages of the fake book. But, Slavin and company don’t stick exclusively to standards—towards the end of the evening, he and the trio bring out a great lounge rendition of Robert Johnson’s “Everyday I Have the Blues.”

Recorded on Halloween night, the album features pianist Ehud Asherie, bassist Joel Forbes and drummer Phil Stewart—all NY players. Forbes and Stewart certainly hold down the low end on this evening in Chelsea, but Asherie steals the instrumental show, threatening at times to pocket Slavin’s spotlight. The Israeli-born pianist is a chameleon at the keys, rending huge swaths of territory on his runs up and down the keys or stating the changes with the simplicity and careful tone of minimalist master Ahmad Jamal.

Before his closing number “Mack the Knife,” Slavin gives a little personal history of his bond with the Kurt Weill tune. Speaking to his days singing at Dick’s Last Resort on the River Walk, Slavin makes a kindhearted jab at the out-of-towner crowd at Dick’s, a place “where flip-flops are the style,” he says. “Twenty-four years ago I got my first break down there. This is the song that I always close with ’cause it’s my good luck charm.” Cool without sounding corny, Slavin burns up-tempo through the violence of “Mack the Knife,” far away from the River Walk tourist crowd in time, space and recognition. 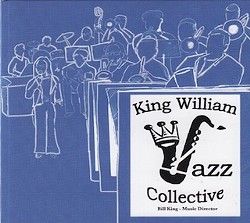 The self-titled release from saxophonist and bandleader Bill King, King William Jazz Collective is a big band showcase of the finest players San Antonio has to offer. Trumpeters Logan Keese and Jason Jones dominate the top of the spectrum, providing the punch’s weight when the band opens up. The rhythm section of pianist David Lopez, bassist Bob Storck and drummer Darren Kuper are limber enough to pound on the huge hits and remain quiet but engaged on softer features like “Too Young to Go Steady,” featuring singer Joan Carroll.

Of course, bandleader Bill King isn’t slacking either, satisfying the first chair of the sax section. On paper, King’s arrangements highlight the power of his band. On saxophone, King is a deft battlefield leader, weaving the melody through the intricate parts and arrangements he devised in the war room.

In the seven original compositions that make up Greenhorn in a Red State, altoist Richard Oppenheim brings a clarity of vision that only an outsider can provide. Since moving from New York to San Antonio in 2006, Oppenheim’s been gigging nonstop and taking notes, capturing the energy of SA on his newest release. On “The (Intermittent) Sidewalks of San Antone,” Oppenheim and his wife Katchie Cartwright trade off between alto and piccolo in a spastic exchange, evoking walks on midtown McCullough, where sidewalks cut out without warning to interludes of street and front lawn.

With Oppenheim and Cartwright’s daughter Eleonore on bass, Greenhorn is a family affair, slicing through Oppenheim’s quirky compositions with the help of pianist Mark Lomanno, drummer Kevin Hess and percussionist Georgie Padilla. The rhythm section shines on the loose boogaloo of “Where Is Baseball?” as the elder Oppenheim and Cartwright tag team the wandering melody.

Released by Harriton Carved Wax, Greenhorn in a Red State is one of the most strangely articulated and accurate visions of SA I’ve come across, like the jazz equivalent of Porifirio Salinas’ South Texas landscapes.

Learn how to put a song on itunes at ReverbNation.com