Saddle Up At The Watering Hole 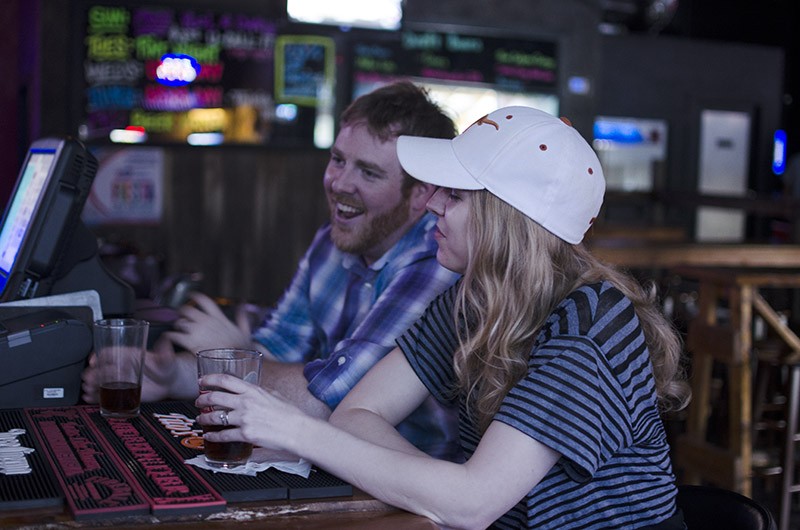 Sometimes a bar needs a good makeover that'll help attract a fun crowd without falling into a rut. I lived down the street from RBar, a tiny cantina that was wedged between a Cambridge Auto Center, a Full Service Auto Parts and a Lone Star Body & Paint, for the better part of a year – but then I moved out and was left wondering what happened to that beer joint.

The answer? RBar was turned into The Watering Hole, another not-so-great example of SEO, but a very inclusive bar setting near the Medical Center. The new owners made some obvious upgrades. These are the same folks behind bar arcade-favorite, Slackers, and The Silver Fox, a Leon Springs roadhouse that caters to all despite its moniker. Though it's still a hole in the wall, and RBar's signage continues to command the outdoor façade, the bar's inside has been tweaked.

The clubby bar lights and aesthetics were swapped for rustic wooden touches used throughout the interior and outdoor patio. Long, tall wooden eight-tops are scattered throughout and touches of Slackers are visible in the lone Beer Ball skee ball lane, Golden Tee Live golf game, two water-filled beer pong table sets and darts. Another Slacker staple, a ridiculously frustrating ring toss game, is also available at The Watering Hole, though as a bar-top game and yes, it's equally tough.

If the games, pool table and two dartboards aren't enough to keep you entertained, the bar doubles as a sports fan refuge with a handful of large flat screens scattered around, further driving its mini-Slackers impression. The pièce de résistance is the 40-foot projection screen that streams three games at once (they were basketballs deep in March Madness during our visits) that sits on the bar's elevated second portion.

Just like other area bars that cater to USAA employees fresh off the clock, The Watering Hole features specials for said professional clientele on Wednesday and Thursday. The insurance claims adjusters and such filled the joint at around 6 p.m. with their loosened ties and business attire, whilst enjoying $3 wells, probably hoping to wait out the area's traffic jam. Sadly, San Antonio Current employees don't get that discount, but to be fair, The Watering Hole prices were far from steep and specials are available throughout the week.

Sundays mean free pool and darts with $3.25 "u-call-it on almost anything" while Tuesdays are pint night. Thursday means Trivia Night and you can work on your toss during Beer Pong tournaments on Fridays. Service industry folks also get a bit of a break with 20 percent off their tabs.

This being a beer joint and all, The Watering Hole does have a fair selection of brews both big brand and local. Draft choices, 20 in total, included Blue Moon (a peachy seasonal), Miller Light, Crispin, Killians, Abita Grapefruit IPA, a few selections of Leinenkugel, Pedernales' Lobo Negro and Robert Earl Keen's Honey Pils, Karbach's Hopadillo, Modelo Especial and Freetail's Soul Doubt IPA (though they were out for the evening).

Bottled and canned selections elevated the beer selection to around 50-ish brews, so hop fans won't go thirsty any time soon. And a full-bar means the beer-averse sect can still enjoy their outing. Though I made my way over to the bar with only two buds in tow, The Watering Hole is spacious enough to accommodate large groups with ease – its homey vibe will keep it from feeling too corporate.

Some folks know how to open a bar and keep bar-goers entertained. That's the case for owners Mike Salinas, Wallace Harding, Jeff Shoemaker and Steve Blames, who are bringing accessible and laidback joints to San Antonio with signature details. For USAA employees and area neighborhoods who are down to party with fun specials in a clean, lively space, The Watering Hole is a convenient joint that will soon turn into a favorite.