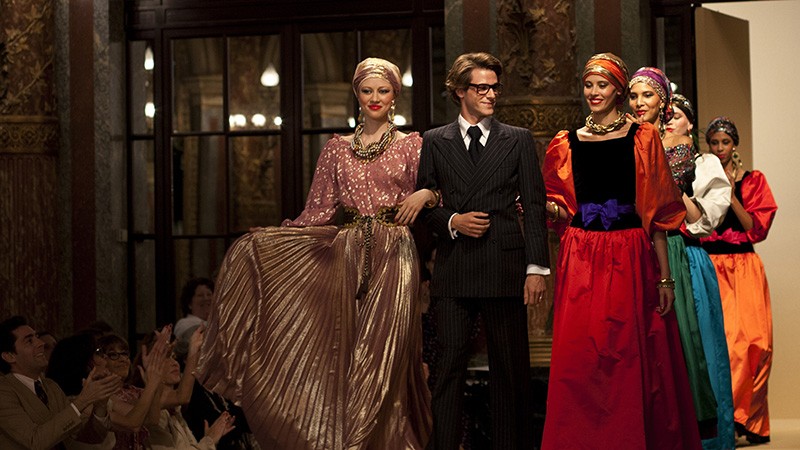 Biopics tend to take on the personalities of their subjects and writer-director Bertrand Bonello's Saint Laurent offers all of the clean, flowing lines of the Algerian-born designer's iconic fashions, while remaining just as mercurial and indulgent as the man.

It's a stubbornly oblique, aloofly stylish and oddly compelling film that offers little biographical context or narrative form, instead compiling a Thirty Two Short Films About Glenn Gould-style mixtape of banal and crucial (and crucially banal) moments from Saint Laurent's life, forming a fascinating silhouette of an ultimately unknowable man.

Like almost every good biopic, Bonello's film doesn't try to compact its subject's entire life into a three-act narrative, but rather concentrates on a very specific period, in this case the time between 1968 and 1976 when Yves Saint Laurent was at the height of his fame. Saint Laurent is unique in that it's not a story about an artist's difficult ascent toward triumph, but about his easy descent from triumph toward irrelevance and into oblivion. The Yves Saint Laurent that we see here devolves from a man into a brand into mere initials — and finally into nothing. By the end of his life, an oversized photo of Saint Laurent is deemed an acceptable, even preferable, stand-in, at an important company event.

Bonello opens the film in 1974, as an exhausted Saint Laurent (played well by Gaspard Ulliel) checks into a Paris hotel room and prepares to give his first tell-all interview. We mostly see him from behind, an outline of a man with thick glasses and an inscrutable expression. By the end of this 150-minute film, he feels just as vaporous and unembraceable.

After the prologue, Bonello cuts back to 1968, with Saint Laurent riding high on his prêt-á-porter popularity, haunting nightclubs into the dawn and cruising the streets for men while carrying on a relationship with his business partner Pierre Bergé (Jérémie Renier, a favorite of the Dardenne brothers).

The designer that we see in 1968 is aloof and withdrawn, but he's also genuinely engaged with his work, an exacting artist, restlessly sketching and creating, not the hollowed-out husk we see in 1974. In one of the film's most indelible moments, Saint Laurent spies the statuesque blond model Betty Catroux in a nightclub booth, and briefly envisions himself in her place, the artist and his writhing muse fused into one. But as the YSL brand merges with an American corporate entity, mundane economic realities and unrealistic expectations begin to clash with artistic ambitions, and Saint Laurent the man becomes less important than Saint Laurent the brand — even the tell-all interview eventually gets squashed.

An exposed and soul-sapped Saint Laurent retreats into the narcotic comfort of prescription medication and the lifeless company of ennui-drenched, hard-partying sycophants. While the world outside goes through the wringer of social unrest, Saint Laurent remains sealed in a disco fishbowl ribboned with neon rainbow skies, a blaring temple to "bodies without souls" that affords him "no contact with reality."

The standoffish tone, deliberate pace, lengthy running time and zombie protagonist of Saint Laurent seem designed to frustrate and alienate audiences (it crashed and burned at Cannes last year), but I felt intoxicated by the simple, sexy camera moves of cinematographer Josée Deshaies and by Bonello's piecemeal portrait of artistic desiccation.

There are times when the film is too on-the-nose, as in a sequence where a parade of Saint Laurent seasonal lines gets split-screened with scenes of the protests and riots occurring outside of his bubble. But a few ill-conceived and annoyingly self-conscious moments aside, Saint Laurent stands as a beautiful and bleak portrayal of artistic success as the ultimate artistic poison.