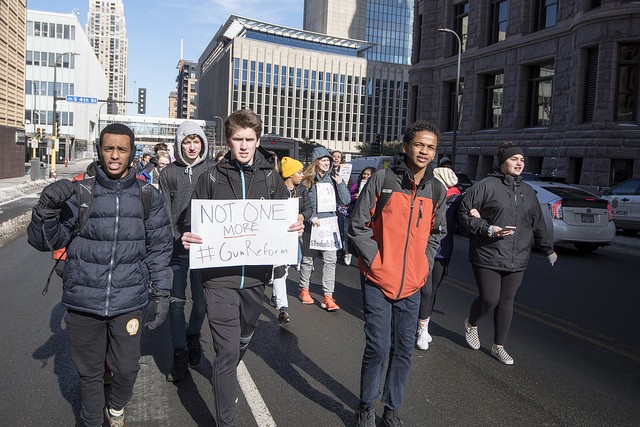 On Monday, we reported that San Antonio's North East Independent School District would be punishing students who cut class to participate in any of the scheduled national school walkouts — events planned to protest unchecked gun laws and memorialize the high school students and staff killed in Parkland, Florida last month.

Both of the national walkouts currently on the books — on March 24 and April 20 — ask students and teachers to leave campus. The latter protest, which falls on the anniversary of Columbine High School shooting, will only last 15 minutes (falling at the same time across the country and across time zones).

In a letter sent home with students, NEISD officials wrote it will treat a walkout as an "unexcused absence, and the student will not receive credit for any work expected to be completed during the class period." It also explained that it would reject parent's requests to excuse their child from class to join a protest.

At the time, San Antonio Independent School District told media outlets they had a similar code of conduct.

However, many parents, students, civil rights lawyers, and general members of the public didn't take this news well — arguing that civic involvement was not only an important learning opportunity, but a right for all students. And, it appears, SAISD was paying attention. On Tuesday, we received an email from SAISD clarifying their walkout rules.

"We respect and support the right of our students to advocate for causes that are important to them," the statement, sent by SAISD spokeswoman Leslie Price, reads.

Yes, students who leave an SAISD campus for a walkout will still get given an unexcused absence. But, Price notes, district high schools with students interested in joining a walkout will plan a "structured peaceful assembly" on campus.

"Our top priority is to support the academic and social emotional needs of our students while maintaining a safe and orderly learning environment for all," the email explains.

It's unclear if NEISD will follow suit. A district representative did not immediately return the Current's request for comment.