Sally Yates Wipes the Floor With Senators Cruz and Cornyn 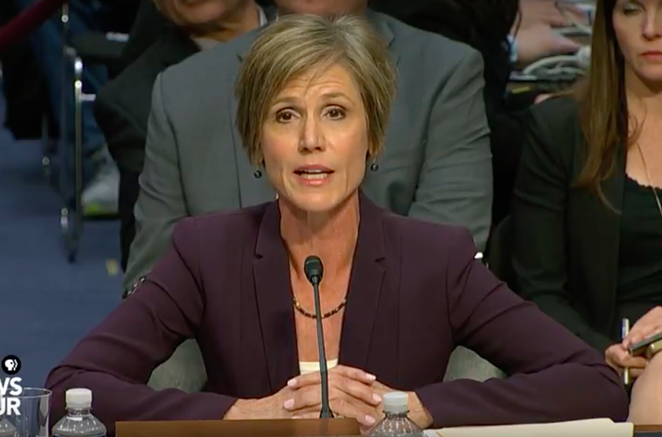 At Monday's Senate Judiciary Subcommittee hearing on Russia's interference in the Presidential election, Texas Senators Ted Cruz and John Cornyn were
eager to talk about anything but the matter at hand. Instead, they put their energy into badgering former acting attorney general Sally Yates about her refusal to enforce President Donald Trump's anti-Muslim travel ban.

They might have been better off sticking to Russia. Yates effortlessly — yet politely — schooled both Cruz and Cornyn in each Senator's line of questioning, making both Texas Senators look woefully incompetent.

Cruz was the first to be taken down by the veteran federal prosecutor. He first asked if she was familiar with an obscure constitutional rule about executive orders — and then proceeded to read it to her. After patiently waiting for him to finish, Yates said that yes, she was familiar with the rule, but said it was an "arcane statute" that had nothing to do with the constitutional right to religious freedom (something she contends the Muslim ban denied).

"I'm not," she replied. "But I'm also not aware of a situation where the Office of Legal Council was advised not to tell the Attorney General about it until after it was over."

Cruz thanked her, and added one last jab, perhaps attempting to erase her logic: "I would note that might be the case if there's reason to suspect partisanship." This was followed by an audible groan and a few laughs from Democrat committee members and the audience.

Shortly after, Cornyn recalled voting for Yates' confirmation to the DOJ 27 years ago. "I find it enormously disappointing that you somehow vetoed the decision of the Office of Legal Council...and decided instead that you would countermand the executive order of the President of the United States because you happen to disagree with it as a policy manner."


Yates didn't skip a beat. She told Cornyn she also remembered him attending her confirmation hearing.

"You specifically asked me that if the President asked me to do something that was unlawful or unconstitutional...would I say no," Yates recalled. "And I looked at this, I made a determination that I believed it was unlawful and inconsistent with the principles of the Department of Justice, and I said no.
That's what I promised you I would do and that's what I did."

Sen. Cornyn replied with an incoherent mumble and became suddenly captivated with shuffling papers on the desk in front of him.

It seems both Texas Senators didn't expect a constitutional expert to catch them in their partisan fallacies. In the words of Yates: "All arguments have to be based on truth."