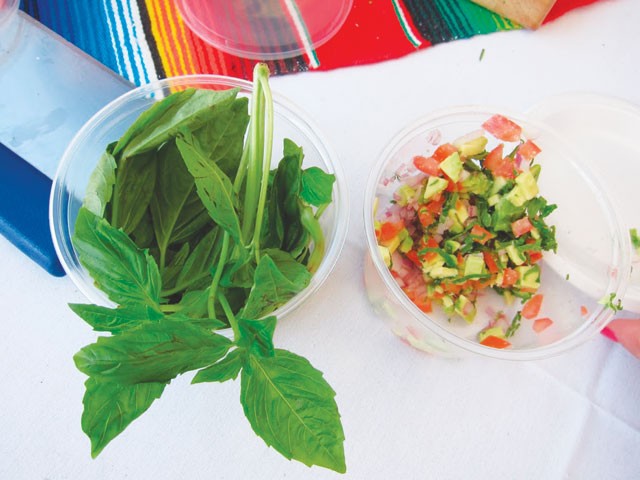 Are San Antonians ready for salsa made without cilantro? The judges at Culinaria’s “Totally Tejas” totally thought so this past Sunday. The winning salsa, by Chef Jesse Perez of Alamo Café, surprised taste buds with a refreshing bouquet of minced basil, oregano, raw habanero peppers, and sun-dried tomatoes. “It’s time to step away from cilantro in salsas and move on to other herbs,” Perez said.

Perez proceeded to give a 20-minute seminar on preparing award-winning salsa in your own kitchen, suggesting:

• Jalapeno seeds are indigestible, cut out the membrane (where the most heat-storing capsaicin is present) and the seeds before mixing with other ingredients.

• Cut tomatoes from the edges to just before the seeds for drier salsas.

• Tomatoes and avocados should have a little “give.” If they don’t, throw them in a brown paper bag until they ripen.

• Ripe avocados are green throughout, not just the outer ring.

• Cut avocados with the skin still on for cleaner cuts, then peel the skin off.

Leftover salsa scraps? Don’t trash it, make stock! Throw the leftover skins and veggie sections into a pot and cook with chicken broth at a constant heat (no boil) for 4-5 hours. “If you’re not saving money in the kitchen, you’re not going to be cooking for very long,” he said.

Although she didn’t win the prize, Brenda Craig was definitely the “salsalicious” sweetheart of the event with her jarred, all natural, gluten-free salsas ranging from “kissed with heat” to “hot iron habanero.” She said her saucy salsa started in her backyard with an overzealous garden tomato harvest that was fire roasted in her home kitchen. A fifth place finish at the Scovies in 2006 finally convinced Brenda she had something with her smoky, caramelized roasted essence and found the perfect canning company to help mass produce without sacrificing flavor.

Culinaria (“coo” as a baby coos) is a non-profit organization committed to promoting “San Antonio as a premiere destination for wine and food while fostering community growth and enrichment.” Although Totally Tejas was the group’s last event of 2011, organizers are already planning for a 5K run and week-long food festival to kick off in May 2012. •