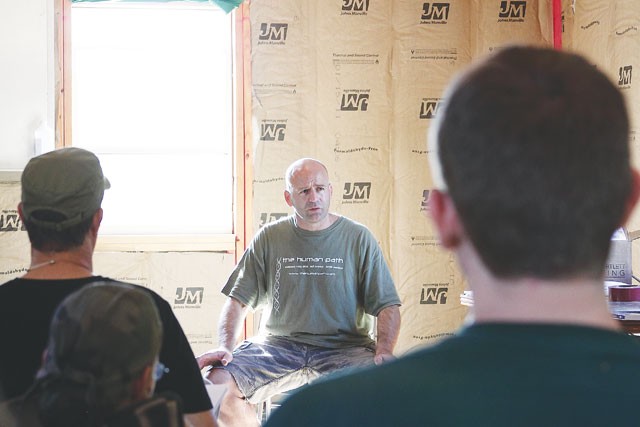 One definition of survivalism has to do with making it in nature without all of society’s fluff: going primitive. The other definition, perhaps more familiar, involves stockpiling Triscuits and forbidding anyone to use the chemical toilet until the bombs start falling: going paranoid. And while both consider civilization a pretty flimsy concept, Sam Coffman, founder of the survival school The Human Path, worries that those bunker-lovers have hijacked a term that really has more to do with integrating the human species with the rest of life on Earth than with putting up more walls between people.

Survival schools, he says, reflect a range of beliefs, “from people who live in bunkers and who are counting their ammo and want to shoot anybody who comes on their property, all the way to people who are singing ‘Kumbaya’ and dancing around the trees.”

The Human Path teaches “primitive skills” that span burly topics — building fires, tracking prey, and hand-to-hand combat — alongside pastoral themes — local herbs, field medicine, and permaculture. So Coffman’s mission is to integrate the need for security with a love for nature in the two qualities he hopes to teach every student: adaptability and awareness. The school’s motto: “To be the best possible person you can be in the worst possible circumstances.”

This sweep of knowledge came from a variety of sources. During the ’80s he was an interrogator for the U.S. Army in Germany, and during the ’90s he was a Special Forces combat medic. The rest of his life to date has been marked by an immersion in nature, some of it involving only a knife and an elk-skin.

Something in the alchemy of these experiences made him worry about the human race. Namely, will there be one in the future? So about a year and a half ago he created his school. “When I first started teaching this stuff, it was just all random skills, it didn’t really tie together. And now it does, because the thing that ties it together is the survival of the species.”

He thinks the version of society we’ve got is a “mutually agreed-upon hallucination.” If you get mugged, for example, it squashes “that illusion that you had that you were in complete control of your life, because culture and TV and internet and YouTube and ‘The View’ and everything told you that this is what your life actually is.” Don’t rely on corporations or the government or daytime television to come to your aid when things fall apart; why, just look at New Orleans. When disaster strikes, he says, surviving for six months with your Triscuits ain’t going to cut it. “What you have to do is understand, how do we re-enter into the world? How do we do that without recreating all the same bullshit and all the mistakes that got us here in the first place?” Coffman wants to teach us how to once again make friends with Nature, that old spurned chum, when civilization up and quits on us.

Coffman has bright eyes and a shaven head and resembles at times that wry scoundrel Bruce Willis. At other times that perpetual drill sergeant R. Lee Ermey comes through. In him, you can feel the weight of the archive he carries around in his head. It’s an archive that can tell you what that shrub is growing on the side of the road and the best wood to make a longbow so you can take that deer that, given time and temperature and seasonal conditions, should show up at just this spot just in time for you to bring it home for dinner. Knowledge sticks to him. And he wants to pass it on.

The Human Path is “a blueprint for people that are really highly urbanized,” he says. He hopes his school answers a range of questions. “How do you start gardening on your own? How do you actually prepare for a disaster? And by doing that then, my hope is to be able to pull in community.”

He’s off to a good start. Though he started teaching classes in February 2009 on his back porch, he really got up and running after moving operations to an abandoned rock quarry on the north side of San Antonio in April 2010. Since the move people from all over Texas have been drawn to his 50-acre property, where he teaches his classes with a few other experts keen on adaptation in primitive and urban environments. The curriculum is broken up into five modules, or “archetypes” as he calls them: Primitive Engineer, Combat Medic, Hunter-Gatherer, Scout, and Leader. Each module requires 100 or more hours of study, in which time students learn how to find reliable food and water sources, protect themselves and their group through defense and naturally based medicine, and generally build a new society if and when ours craps out on us. Coffman estimates that to complete all five modules would take two years of fulltime study. There’s that much to teach. And students are working their way through it.

Bryan Bible is a software consultant (like Coffman) who lives in Round Rock and has gone through a chunk of Human Path curricula. It wasn’t paranoia that attracted him; rather, a “nagging thing that told me you need to learn this stuff, not just the survival part, but all of this,” he says. “To me it’s a bunch of our history and past that’s getting lost because of all the technology out there.” Like a lot of Coffman’s students, Bible has kids and worries about the future they’ll inherit. He wants to anticipate the future by carrying the knowledge of the past forward. “To be honest, I’m not a doom-and-gloom kind of guy. I don’t think there’s necessarily an apocalyptic thing gonna happen,” he says. However: “If something happens, this stuff is gonna be a way of life.”

For some, it already is.

Vickie Honeycutt is an attorney living north of Austin. She’s gone through a year of herbology, and rather than stoking a fear of the future, it’s made her more excited about it. “I just realized it was time for me to be a little more responsible for my own welfare. And I want to be able to help my family and my community,” she tells me. “It’s just basic good citizenship.”

To that end, she’s turned her property into a small farm with chickens and goats, rabbits and a garden — a farm that has since become a satellite campus for Coffman. She feels like she’s inside of nature looking out, especially when driving. “I look out the window and don’t see a green blur.” Instead there is medicinal agarita, mesquite pods that can be made into tortillas, yucca that becomes soap. “My world is full of things to take care of me, and I never even knew.”

Though The Human Path prepares for a future that looks like what happens between the end of Fight Club and the beginning of The Road, it’s equally about sustainable farming and forming smaller, more durable communities that are tied to the earth.

“There is an underlying message and idea and concept and vision, to pull people together and to promote hopefully the long-term survival of the species, ’cause we ain’t gonna make it the way we’re going, and I know that for a fact,” Coffman says. “This is sort of my piece, until the day I die, that I’m hopefully trying to give my part back to humanity.” •

For more information about the Human Path, visit thehumanpath.com or search for them on Facebook.

Hunter Gatherer
Mastering primitive fire not only provides “fire,” but also food (cooking animal, insect, and plant food is critical), water (boiling for purification), and shelter (heat). But most importantly, learning to start a friction fire from only natural materials is an extremely important step in increasing morale in a primitive survival situation. Attitude is crucial in survival.

Scout
There is no such thing as real “silence” in the natural world. Stealth is best achieved by being aware of and balancing your movement into the natural, existing baseline flow of sound and movement.

Leader
In crossing a dangerous area with a team, one thing to remember is that speed is a form of security.