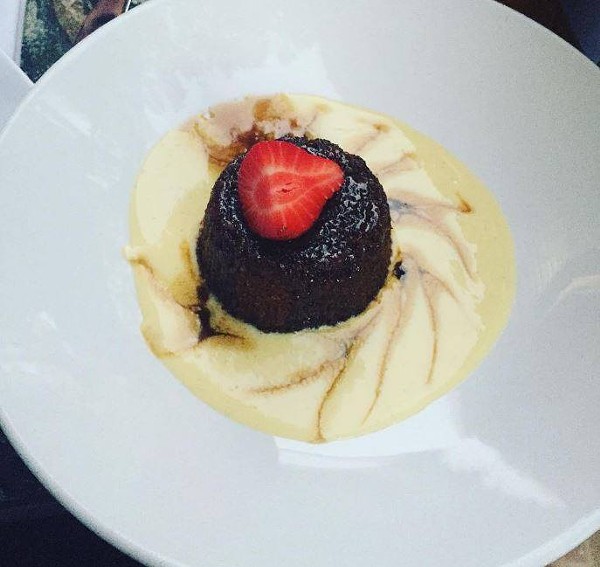 We're compiling a list of our favorite 100 dishes in the city with the San Antonio 100. Check back weekly for a new dish we love that either screams SA or you need to enjoy ASAP.

‘Tis the time of year for sugar plums — cue “the Nutcracker” and “The Night Before Christmas.” I hate to be the one to break this to you, but no plums are harmed in their making. Nor are plums a part of the traditional British plum, or Christmas, pudding; the name actually dates from a pre-Victorian time when “plums” were a term for raisins. Charles Dickens at first reviles the dish in “A Christmas Carol”: “If I could work my will," said Scrooge indignantly, "Every idiot who goes about with 'Merry Christmas' on his lips, should be boiled with his own pudding, and buried with a stake of holly through his heart. He should!" He later relents at the Cratchit’s — though he calls it “like a speckled cannon ball.” The Brits, it seems, have a love-hate relationship with pudding.

And names, it appears, are often not reflective of actual ingredients. Canary pudding doesn’t contain canaries. (Yes; it’s merely yellow.) Figgy pudding (Christmas again) does contain figs, but figgy dowdy doesn’t. So confusing can all this be that there’s even a website to sort it all out: greatbritishpuddings.com.

On it you’ll also find Spotted Dick, the occasion of much snickering by those not of English inclination. (The spots are dried fruits; nobody can agree on what the “dick” part refers to, but suffice it to say …). And you’ll also find sticky toffee pudding; it rates near the top of any pud-popularity list I’ve seen.

It ranks high on any list of San Antonio’s iconic desserts thanks to our own favorite Brit, Biga’s Bruce Auden. The dessert has been available from day one at Biga in a form developed by Auden and then-pastry chef Katherine Tuason. (Variations are totally fair since this is a dessert Dickens never knew.)

Today’s menu calls it “Biga’s comfortingly rich signature dessert … inspired by the British classic.” That classic has many forms — some baked, most steamed — but a common thread appears to be dates, despite their not being mentioned in the name (it is, however, called sticky date pudding in Australia and New Zealand) and the toffee sauce. Auden pulls out all the stops and augments his presentation with a honey-sweetened custard sauce.

The recipe has been published; you can Google it if you want to try the preparation at home. But it is just complicated enough to suggest that you should go have the iconic pudding there — maybe with a glass of Sauternes. It’s not strictly Christmas, but it’s seasonal enough.