One look at Trent Anderson, and you wouldn’t assume he owns a burgeoning food business.

But that's exactly what the 15-year-old has on his hands as the owner of BeeSpace, a Castroville-area enterprise focused on rehoming and raising honeybees.

The high school sophomore spent nearly three years building his business from the ground up, working with other San Antonio-area beekeepers to gain both the knowledge and equipment to enter the world of commercial beekeeping.

“I have an issue accepting a paycheck, because I feel like that can trap you into accepting an hourly salary,” the teen told the Current. “I would work for multi thousand hive operations ... and [their] old junk boxes would be my payment.”

Once Anderson, then just 13, cleaned up the habitats, he went door-to-door in his community, offering to remove bees from homes where hives had proliferated in troublesome spots such as roof soffits and chimneys. 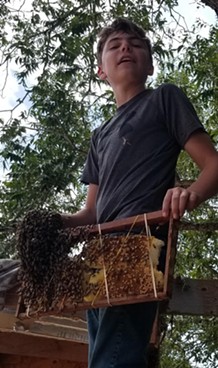 Negotiating the bees themselves as payment for the hive removals, Anderson trucked the colonies up to his property to give them a shiny new home in his repurposed boxes.

The young man now supplies a pair of California farms — cherry and almond — with the pollenating powerhouses and offers a line of products he produces and packages himself.

Whipped honey is a spreadable version of the liquid gold that’s been whipped to a creamy texture via agitation and crystallization. Anderson typically adds seasonal flavorings such as cinnamon or pumpkin spice to the concoction so customers can spread it on toast or stir it into their coffee.

After Anderson's bees have pollinated Californian almond and cherry farms, they'll be sent to orange groves in the same state, then on to the foothills of the Sierra Nevada mountains to make high-elevation wildflower honey.

Anderson has cared for as many as 80 hives at a time, a number that typically fluctuates with the weather. Last winter, he added, was brutal for beekeepers across the nation.

“Last year was one of the worst years, from talking to other commercial beekeepers,” he said. “It was really terrible, compared to what they’ve seen in the past.”

Indeed, American beekeepers lost nearly half — about 44% — of their honey bee colonies from April 2019 to April 2020, according to a nationwide survey conducted by the nonprofit Bee Informed Partnership.

Despite that temporary setback, the young entrepreneur aims to continue sending bees West to help pollinate almond farms, and he wants to form partnerships with local restaurants to share his honey with diners. In June, Anderson will begin offering beekeeping classes plus an extended line of products that will include pure-beeswax candles and soaps made with honey.

He also hopes to develop an extensive network of Texas beekeepers similar to the one he was introduced to on visits to The Golden State.