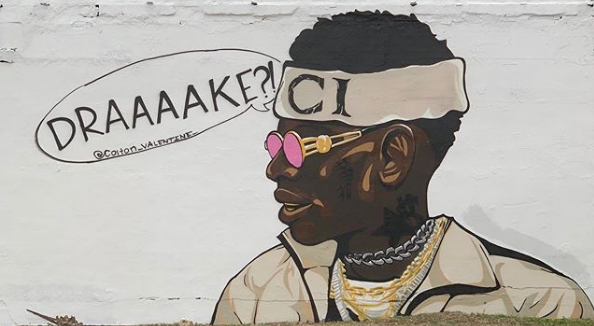 Soulja Boy has made a hilarious mark in pop culture. After appearing on last week's episode of The Breakfast Club, a New York City-based radio show that's syndicated on local station 98.5 The Beat, his interview has inspired a local San Antonio artist.

That's been most people's reaction to the artwork created by 27-year-old Colton Valentine. Valentine has been a resident of San Antonio for four years, hailing from Carson, California.

The image was created on the side of Supremes Sports Bar, located on 820 San Pedro Ave. The bar opened in October 2018 and has been thriving on the San Antonio Northside.

"I've done work for the sports bar before," said Valentine. "I worked on another mural for them a few months ago. The owner called me a week ago and gave me free-range over the other side. I had just finished watching the hilarious interview and knew that I wanted to paint Soulja Boy's face."

With the interview having already reached over 13 million views on YouTube since it was posted on January 16, the internet remained undefeated. A new meme highlighting Soulja Boy's, now famous, "Draaaaake!" quote has gone viral.

"The meme took off by the time I began the work," said Valentine. "As soon as I finished it, the painting was reposted within hours, I guess it was right on time. The Shade Room, as well as a few other media spots reached out to me on Instagram and asked to repost it."

As the Soulja Boy wave continues, San Antonio has embraced its new work of art. Locals have already begun sharing photos of themselves next to the image.

Valentine, who has only been a "serious" artist for two years, finds his artistic inspiration from comic books.

"I wanted to create something big with a classic comic appeal to it," he said. Valentine seeks to use his platform as a way to inspire other young artists to be more productive and creative. "Although I've only lived here four years, I love San Antonio. It's dope to have such a warm welcome."