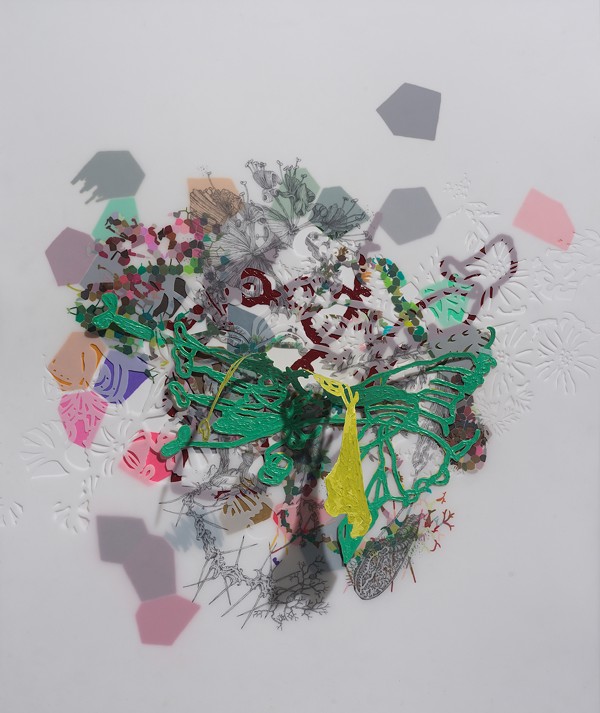 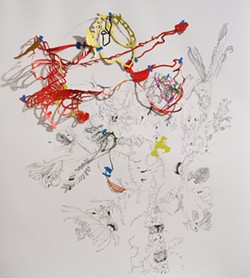 nerdy DJ and full-blown mad scientist, she recreates historical botanical illustrations in graphite on semi-translucent drafting film and then remixes her samples in stacked arrangements interspersed with what she’s described as “floating cells” and “distorted offspring plants.” Easily among her greatest hits, Lester’s 2011 Hunting Prize-winning drawing Mutant Spectre is essentially the germinating seed for interconnected projects — including some that venture into the sculptural realm with colored vinyl or Plexiglas shapes that conjure maps, microorganisms or bodies of water beneath swirling layers of hand-cut drafting film that pull away from the wall and cast undulating shadows. Although partly informed by her large-scale McNay Art Museum wall installation A Variety of Forms Recovering from Transubstantiated Clarity and her Blue Star Contemporary Berlin Residency at Künstlerhaus Bethanien, Lester’s new solo show “No Necessary Time Axis on Evolutionary Novelties” introduces new elements to the bodies of work she’s created over the last decade. Nodding with its title to an uncertain future enabled by gene-editing technology and a newfound ability to “leap-frog” over evolutionary hurdles, the Contemporary Art Month exhibition sees the artist returning to tradition with a new large-scale drawing (her first in quite some time) and also pushing onward with three-dimensional works involving hand-cut drafting film that’s painted on both sides and behaves almost like a textile that drapes over wall-mounted pieces. Likening the collected works to parts of a “recurring visual vocabulary,” Lester explains that, “If the viewer follows those clues they will find information resurfacing in different pieces throughout this exhibit. A very slow-motioned animation of generational manifestations.”