By Ron Bechtol and Nina Rangel 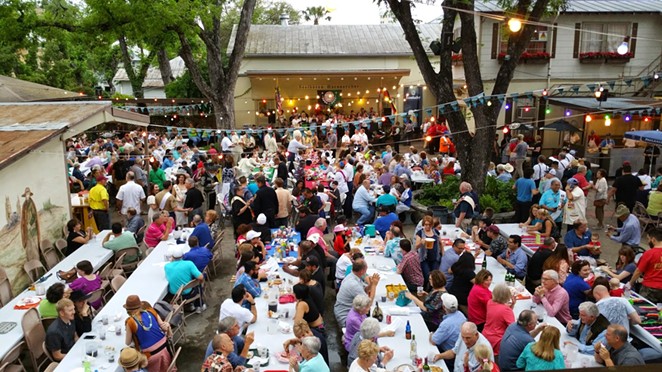 The first Oktoberfest is believed to have taken place in Munich in 1810 with a royal wedding as inspiration. Celebrants had a good enough time that they just kept repeating the festivities.

Outside of Bavaria, though, most Germans were either unaware or unimpressed. It wasn’t until the fall festival took root abroad that Oktoberfest spread throughout Germany.

U.S. towns settled by German immigrants became Oktoberfest incubators as early as the mid-19th century. The barrel really got rolling after World War II when the return of American GIs fresh from encounters with fräuleins and biersteins fueled demand.

A German singing society, or liederkranz, in Pennsylvania is credited with being one of the first to formalize the notoriously informal event in 1949. The beer-fueled bash was taken up in Cincinnati in the 1960s, where it eventually became the largest celebration of any kind in the U.S.

Of course, the phenomenon also took root in San Antonio, yet another city rich in German heritage. Those looking to get in on the fun this month have multiple options, including some one-off events and several biergartens that make great spots to celebrate. When it comes to the latter, it may be worth exploring the most venerable such spot as well as a pair of newcomers.

It’s unclear when the first Oktoberfest took place at San Antonio’s own Beethoven Halle und Garten, but some would say that’s immaterial since there’s a kind of perennial beer-and-brats aura about the place. The Beethoven Männerchor — a men’s chorus — and its associated musical and fraternal components have occupied the hall’s location on Pereida Street since 1924. Before that, home was the historic building at HemisFair Plaza that now houses the Magik Theatre.

Whatever the history, Beethoven Halle’s is “the real” Oktoberfest, or so spokesperson David Uhler said.

Making it real this year is a full schedule of events beginning Friday and Saturday, October 1 and 2 and continuing the following weekend. You may want to practice holding an appropriate weight at arm’s length for the stein-hoisting contest. It’s up to you if you need warming up for the singalongs. Other activities such as the tapping of the ceremonial keg each evening and performances by various Beethoven Halle bands require only a receptive ear.

The spot offers 25 beers on tap on a rotating basis. Many hew toward the lighter end of the spectrum but there are also there are also meltier fall-appropriate offerings. You might want a little practice here too — unless brands such as Weihenstephaner Krystalweis already roll off your tongue.

Beethoven Hall serves food year-round — regular hours are 4 p.m.-midnight, Tuesday to Saturday. However, the menu ramps up around Oktoberfest. A nearly all-volunteer staff turns out brats with sauerkraut, potato pancakes, schnitzel, Reuben sandwiches and rouladen, or beef traditionally rolled around bacon and onions and simmered in gravy. Wednesdays also include a chef’s special. Be informed that a group called Tuba Meisters will perform on Friday, October 8 — so either come early or late depending on your tuba tolerance. There is likely no escaping dirndls and lederhosen, though. Admission is $10 at the gate, which opens at 5 p.m.

German pretty much in name only, the Metzger Biergarten at Cool Crest Miniature Golf on Fredericksburg Road is nevertheless a fittingly cool place to knock back a brew in a setting with a history of its own. In 1929, only a short time after Beethoven Halle was reestablished in King William, Cool Crest opened just in time for the Great Depression. The property was leased from the original owners by Harold and Maria Metzger in 1937, hence the name of the biergarten, which itself is only two years old.

It’s unlikely you’ll encounter tubas or Tyrolean hats at Metzger, but there are German-style beers on tap. On my last visit, Texas brewer Altstadt supplied a lager and a kölsch, but their list also includes both a traditional märzen Oktoberfest and another seasonal brew called Festbier that’s in line with the lighter styles currently in favor for the fall event. Made even closer to home are the German-style Betty, a kölsch, and SA Hefe, a yeasty hefeweizen, from Dorcol Distilling’s Highwheel Beerworks.

Entertainment on tap for October promises neither tubas nor German choral groups but does include music of just about every other genre from jazz to folk and funk. Noshing options from visiting food trucks are equally eclectic. Expect Mexican fare from Serrano’s, pies from Stone Bro’s Pizza and the likes of brisket nachos from Uncle Jesse’s BBQ.

Little Rhein recently gave the space above the storied Paseo del Rio a reinvention of übergröße proportions. Among its offerings are two biergarten patios, German-inspired eats and 20 draft beers, many imported directly from Munich. Local craft suds brewed in German styles also grace the beer taps, and guests can order liter-sized biersteins as well as sampler flights of the brews.

The food menu is extensive, offering schnitzels of various types, German potato salads, brats, sauerkraut, homemade beer cheese, grain mustards and apple strudel. For the exploratory Oktoberfest eater — or just the indecisive one — the Prost Haus Tower may be just the ticket. Its literal tower of German and German-inspired fare runs the has a little something for everyone.

The atmosphere is light and the service prompt, making it easy to stow away a brew — or three — on the patio, watching the San Antonio River meander past the Arneson River Theater.