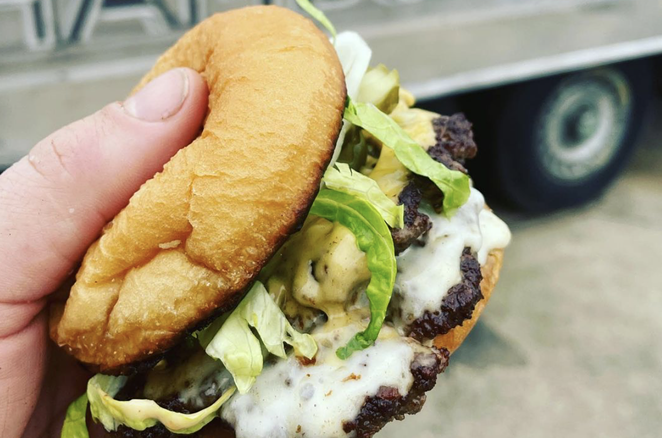 Now, the San Antonio Express-News reports that Bowers will to take his burger show on the road via a new mobile kitchen: The Pump Wagon.

The venture will feature the same wagyu beef patties dripping with melty cheese, mustard, ketchup, onions and pickles on a toasted bun that won raves at the pop-ups. They're prepared in the classic smashburger style, featuring a crispy char on the outside while retaining a juicy interior.

The truck will also serve up Magic Assholes — another Pumpers fave.

What, you may ask, are Magic Assholes, and why would I want to eat one? The answer is that they're expertly pickled jalapeños meant to add a zing to Bowers' $7 burgers. They'll run an additional $1.50 when the trailer opens on April 25. A serving of crispy French fries will run $3.

According to the daily, the trailer will post up outside live music venue Paper Tiger and serve up simple and sinful fare from Wednesday through Sunday. Bowers told the Express-News he intends to hold monthly Pumpers pop-ups at Little Death, where it all began. He hasn't yet set exact dates, though.

"My heart will always be owned by the those that have supported and been involved in Pumpers-Little Death since August 2020," Bowers told the Current. "That’s why [Paper Tiger and Little Death owner Chad Carey] and I have decided to keep the pop-up going once a month even with the Wagon parked across the street. And the Magic Assholes will live on at both!"

Bowers recently left his position as executive chef with the Goodman & Bowers Restaurant Group — which he and restaurateur Andrew Goodman operated together — to serve as sole proprietor of downtown pizza haven Playland. He also continues to work with the staff at Rebelle, the seafood-focused eatery inside the St. Anthony Hotel.