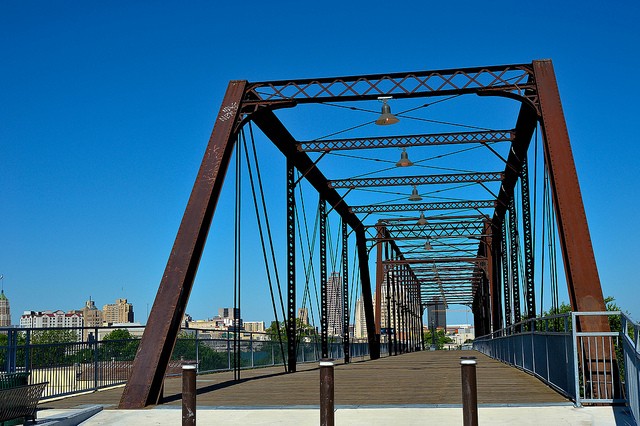 Vying to end a years-long battle over development around the historic Hays Street Bridge, city council on Thursday approved a plan to swap city-owned land for property adjacent the bridge that will be designated as a public park.

Under the transaction, developer Mitch Meyer would give up land next to the bridge where he'd planned to develop a five-story apartment opposed by residents. In exchange, he'll receive two acres of city-owned land at 223 South Cherry St.

Interim Councilman Art Hall, whose district includes the bridge, added the amendment to the deal that would require the plot turned over by Meyer to become parkland. Neighbors objected to Meyer's development, saying it would block views of the bridge and balloon property values in an area already grappling with gentrification.

"It's not a perfect solution, but it's the solution that's on the table," Hall said of the swap, which is a step toward ending a lengthy legal battle between the city and the preservation group that spearheaded the bridge's redevelopment.

The Hays Street Bridge is significant because it was once the primary gateway between the predominantly African-American East Side and downtown.
Council took its 10-1 vote after lengthy testimony from East Side residents, who expressed anger about being cut out of discussions. Speakers, including children and teenagers from the neighborhood, decried the transaction as another insider deal.

Graciela Sanchez, director the Esperanza Peace & Justice Center, said she favors using the land around the bridge for public use. However, she objected to rewarding Meyer with city land that could be used for low-cost housing.

"I hope you've heard that we want the cronyism and these corrupt deals to stop," she told council.

Council members thanked neighborhood representatives and city staff for working toward a compromise, although several echoed Hall's sentiment that there may be no perfect solution to ending the long-simmering conflict.

Mayor Ron Nirenberg pledged to seek more robust public input from neighborhoods, adding that wanted to avoid the fight over the bridge extending for "another council term or another generation." "It's unfortunate that this bridge has become a symbol of why public trust in government has waned," he said.