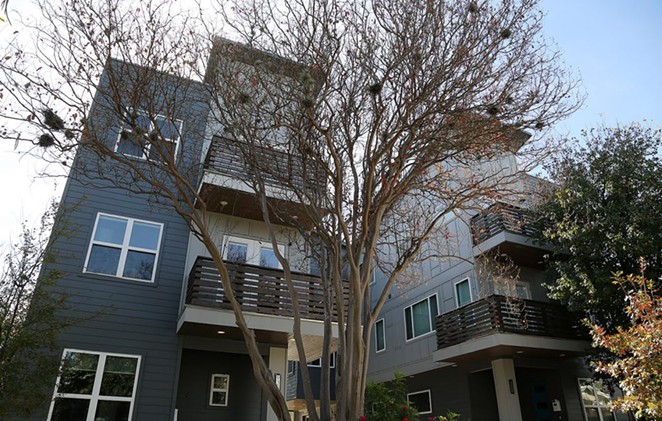 A better-informed city council on Thursday unanimously approved changes to the city’s zoning rules that will now limit the height of the taller, clustered single-family homes that have popped up in downtown neighborhoods in recent years.

The ordinance is a win for resident groups concerned about the taller homes’ impact on the architectural feel of their neighborhoods, as well as their indirect effect on lower-income residents by jacking up property values, and therefore rents.

The revisions to the city’s Unified Development Code, or UDC, will limit single-family developments to 35 feet, or 2.5 stories — as opposed to the 45-foot maximum developers were allowed if the lots they were developing were zoned multi-family. In 2001, as a result of a citywide conversion to a new zoning system, multi-family-zoned properties were left scattered throughout neighborhoods. In some pockets of the west and east sides, for example, rows of homes stand on lots that are nothing but multi-family zoned.

Other revisions include a minimum 10-foot setback for developments in neighborhoods [the distance from the building to the street] keeping in line with most homes; and that the main units face the street, as opposed to all units in the mini development facing each other.

[For a detailed explanation of the revisions, read this story.]

Mike Shannon, director of the city’s Development Services Department, told council members that the tall, thin developments would be grandfathered in — meaning, they would be allowed to stay — but they could not be expanded. He also said developers can always pursue a zoning variance, a process that includes making their case to the Board of Adjustment, if they wanted to build higher than 35 feet.

More than two years ago, a neighborhood coalition, which started in the inner city, lobbied District 1 Councilman Roberto Treviño to initiate the process of reviewing the zoning rules.

The residents group, known as the Tier One Neighborhood Coalition, has said the revisions are a good start, but that more are need. Starting in January, they’ll get their chance when the city reviews the entire Unified Development Code, a process held every five years.

Underlying the debate between many inner city residents and developers is whether more development leads to more affordability — otherwise known as supply and demand.

Cynthia Spielman, a member of Tier One and the Beacon Hill Neighborhood Association, asked the council to not buy into what she described as “the more density we create, the more affordable housing.”

“In our neighborhoods now intensity is not producing affordable housing,” said Spielman, who also co-chairs the Removing Barriers to Affordable Housing Task Force, a new group formed by Mayor Ron Nirenberg. “It produces a lot of market-rate, expensive housing that drives up land values … and causes displacement, making the income segregation in this city worse.”

[Editor’s note: To be fair, for every advocate like Spielman, there is someone on the opposite side of the supply-and-demand debate who will argue as vehemently that more supply leads to more affordability in the long run. None happened to speak to the City Council on Thursday, therefore none are quoted in this article.]

Spielman argued for density, but rather along commercial and transportation corridors.

“Density should be part of the affordability equation but not in a way that displaces people from their homes and the apartments in which they live now,” Spielman said.

District 8 Councilman Manny Pelaez, one of three North Side council members, voted in favor of the changes, but not without some reservation.

“I’ll support this. I get it,” Pelaez said. “I’m concerned, however, that it won’t be too long before we come back and revisit this issue and maybe even undo what we’re doing today simply because density is something that is being prescribed to us in order to alleviate traffic.”

He also defended developers, and then segued into how he perceived Tier One’s remarks as being more about homeowners not wanting ugly houses on the block, rather than trying to protect renters.

“I want to remind everyone of us that each of us lives in a home that was built by a builder in a neighborhood that was developed by somebody,” Pelaez said. “I’ll end with reminding you that the real people in San Antonio include people who live in apartments. It smacks of elitism when we exclude them from the conversation and discount them as people—those other people who are kind of undesirable. And so I just want to make sure we are careful that we remember that it’s not just homeowners we represent but renters, as well.”

After the meeting, Tami Kegley, vice president of the Alta Vista Neighborhood Association, who spoke in favor of the rules changes, took issue with Pelaez’s remarks.

“That that’s what he got out of this conversation really concerned me—making it clear: this isn’t about elitism,” Kegley said. “This is about preserving that missing middle [housing] that’s disappearing. So when someone overbuilds a lot, the ground taxes go up, [for] those landlords, the rents have to go up.”

When asked if affordable housing was part of the initial lobbying campaign of Treviño more than two years ago — or if the lobbying started with homeowners only concerned about incongruous types of homes — she said:

“It was certainly on the table, absolutely. And then in the ensuing years it’s become even more so. … They had done a bad demolition in Monte Vista Terrace, and that’s when the councilman announced his [request], because they tore down an apartment building that was fully rented, [the same kind] everyone lives in.”

Next month, Tier One Neighborhood Coalition will push for more restrictions, including changing the part of the code that allows for multiple structures on a lot traditionally reserved for a single house. This is a point emphasized in Treviño’s original 2017 request. City officials have said neighborhoods in other districts may prefer multiple structures over single monolithic buildings containing more than one unit.

Last week, council took up the revisions to the UDC, but District 5 Councilwoman Shirley Gonzales asked for more time, because she and other council members were uncertain of the ramifications of a last-minute amendment by Treviño. That amendment had to do with language inserted into the revisions in November by the Zoning Commission that would have made it possible for a developer to build as high as 45 feet if the lot they were developing was next to another vacant lot.

After being briefed on the proposal this week, Gonzales and other council members felt more prepared to cast their support behind the ordinance. District 3 Councilwoman Rebecca Viagran was absent from the vote for a personal matter, but her chief-of-staff said she supported the ordinance.