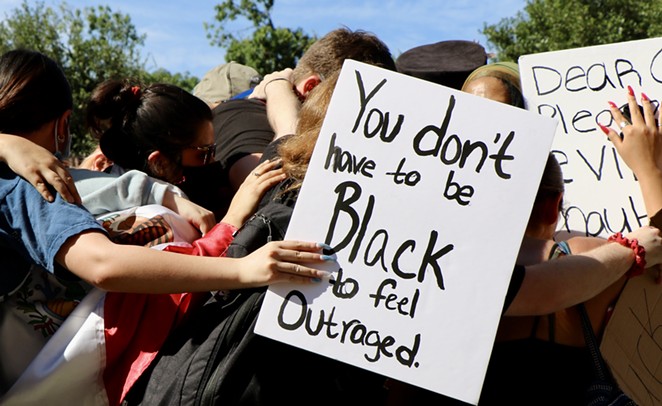 The measure, co-drafted by District 2 Councilwoman Jada Andrews-Sullivan and District 7 Councilwoman Ana Sandoval, calls on city leaders to work with the community to end systematic disparities and racial barriers.

It passes as Black Lives Matter activists have spent months protesting to demand an end to police brutality and a nationwide accounting for systemic racism. Health advocates also warn that people of color are suffering considerably worse health consequences during the COVID-19 pandemic.

“We are addressing the monster that has divided our nation for far too long,” said Andrews-Sullivan, the only Black member of council.

District 10 Councilman Clayton Perry abstained from the vote, saying that while he agrees with the spirit of the resolution, some of its language could divide residents. District 8 Councilman Manny Pelaez was not present.

Every other council member voted to approve the resolution.

While to some degree symbolic, the resolution does call on council to take steps such as increasing its advocacy on issues of race in front of state and federal lawmakers, working more closely with groups that address systemic structures and improving health equity in the city.

In comments to the Express-News, community organizer Celeste Brown said she wanted to see "tangible action" to support of council's rhetoric on the issue.

“Now is the time to put your money where your mouth is and to fund public health at an equitable level to where we can actually address the thing that keeps our community down,” she said.