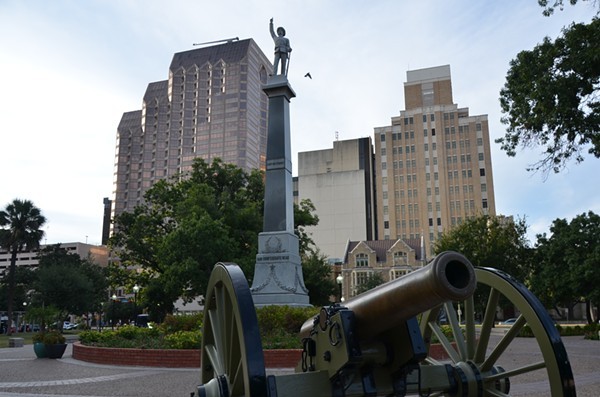 The San Antonio City Council voted 10-1 Thursday to remove a monument of a Confederate soldier towering over Travis Park. The ordinance, submitted by councilmen Cruz Shaw and Roberto Treviño, will allow for both the removal and relocation of the statue (and two accompanying cannons) to a yet-to-be decided locale.

Shaw quoted one of the many threatening emails he's received since submitting the proposal: "Nigger if you vote for this, we'll get you." As he spoke, audience members quietly raised fists in solidarity.

"Equality means our citizens shouldn’t be disenfranchised in public spaces by relics based on actions from another time," said Councilman Treviño, prior to the vote.

Councilman Manuel Pelaez mentioned the death of Heather Heyer, the woman who was killed by a white nationalist in the violent Charlottesville, Virginia protest over another Confederate monument.

"There’s nobody that can deny that the Civil War was horrible and that we as a nation suffered a lot," said Pelaez. "But in 2017, people continue to die in the hands of people that still want to litigate the confederacy."

This vote comes on the heels of a heated rally to save the statue, which took place at Travis Park on August 12 — the same day of the Charlottesville protest. The rally was met with a counter protest from those in favor of removing the statue led by SATX4, the local Black Lives Matter group.

Councilman Clayton Perry, the sole vote in opposition of the ordinance, wanted to delay the vote and to "stick with the process" of passing such a controversial decision by holding community meetings and more council sessions.

On the eve of Thursday's vote, more than a hundred community members packed council chambers to speak in favor and opposition to the controversial vote.

"I don't have children, yet," Tracey Talavera told the council. "But I don't want my future children to play in a park that puts a Confederate soldier on a pedestal."

One group stood quietly at the podium as a short slideshow they submitted played on the screens behind the council dais. Photos of lynchings, a burning Freedom Rider bus, the mangled body of Emmett Till, and other iconic images of abuses against African-Americans crossed the screen, ending with a photo of a modern-day pro-Confederate rally labeled: "Modern day KKK."

"These statues and symbols were created to intimidate newly freed slaves," said Oliver Hill, testifying before Tuesday's vote. "Today, it stands to intimidate people of color."

Other members of the public asked the city to let the community vote on the decision, instead of the council members.

Unlike past hearings, members of This is Texas Freedom Force (the group behind the August 12 rally to keep the monument) did not show up to the hearing or council vote carrying semi-automatic weapons. A spokesperson for TITFF told council that most of the group's leaders are helping with Hurricane Harvey relief on the Texas coast.

Hours before the council vote, a group against the statue's removal filed a lawsuit against the city council for threatening to remove the Confederate monument. The Sons of Confederate Veterans (the same group that sued University of Texas at Austin's president Greggory Fenves for taking down several confederate statues) allege that the city never got a deed for Travis Park from the original family that originally owned it, thus, it's not the city's property. Plus, they claim that the statue is protected under the First Amendment.

"The city's plan to remove the Monument in a matter of hours is an imminent and unconstitutional attempt to curtail free speech by ordaining what mute political symbols must mean," the complaint reads, calling the removal a "first step in a totalitarian move to determine authorized forms of political communication."

The city has yet to formally respond to the lawsuit, but city attorney Andy Segovia confidently confirmed to the council (asked by Councilman Perry) that Travis Park is city property.