Imagine being able to travel from San Antonio to Austin in just 15 minutes by being shot through a tube at 600 mph.

It may sound crazy, but Transonic Transportation, a San Antonio-based company, wants to do just that by using a Hyperloop, a system that uses a magnetic pneumatic tube system with pressurized pods that ride on an air cushion. The Hyperloop is the brainchild of Elon Musk, co-founder of PayPal, CEO of Tesla Motors, and founder and CEO of SpaceX. Since Musk is kind of busy building a spaceport in the Rio Grande Valley near South Padre Island, among other endeavors, he has explicitly urged for anyone to take his designs and theory and further develop the Hyperloop.

Joshua Manriquez, CEO of Transonic Transportation, says he feels that his company can make a Hyperloop system a reality in Texas. But at first, it won't be an actual Musk-esque Hyperloop. "What we would end up doing wouldn't necessarily be a complete HyperLoop from most people's perspective. It would start as an enclosed tube transport," Manriquez said. "As time goes on, we would be able to modify it very easily to ensure that one day you are going to have that future type of travel." Manriquez believes it's possible to start construction on the project in 10 years. "It's something that's not going to happen overnight," he said.

Manriquez envisions this Texas Hyperloop traveling west of the I-35 corridor on raised beams that can transport 6,000 to 18,000 passengers per hour. Instead of getting caught up in eminent domain battles and organized grassroots efforts from rural Texans who generally don't like government or corporations taking their land, he imagines using a royalty system, kind of like the gas and oil industry does with mineral rights, to win landowners over by paying them. 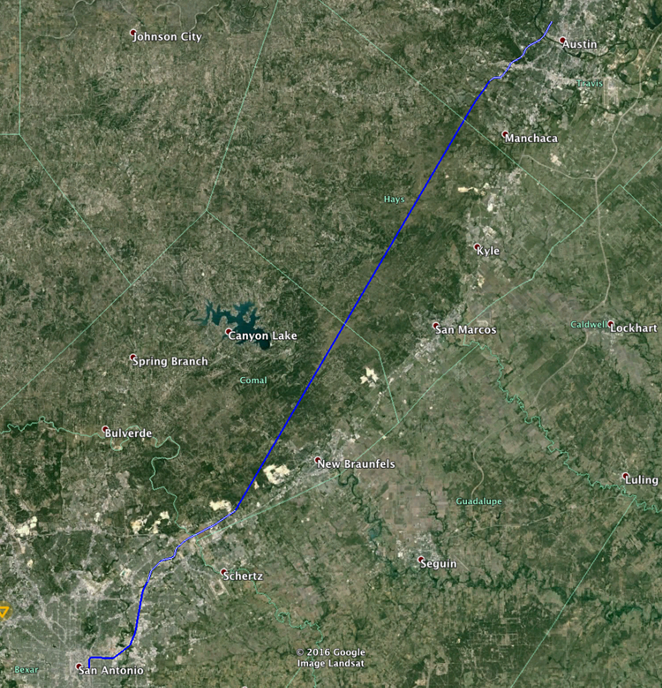 But when it comes to alternative transportation options like light or passenger rail as a way to ease the grinding congestion between Austin and San Antonio, projects often don't get off the tracks. Take the Lone Star Rail District, for instance. Since the late 1990s, the Lone Star Rail District has been trying to find a way to bring passenger rail to the I-35 corridor. And since the late 1990s, those efforts have gone nowhere. Most recently, Union Pacific decided it didn't want to let the district study using its freight rail as a way to incorporate passenger rail.

Manriquez says he's reached out to the Lone Star Rail District to see whether it would be interested in collaborating, but hasn't heard back and doesn't expect to. However, he also says he understands the challenges of building anything other than a highway, road or pipeline in Texas. It just doesn't work out often. If it eventually doesn't, Manriquez says he hopes Transonic Transportations' efforts at least educate people about alternative transportation because Manriquez doesn't think the state of American infrastructure is sustainable, which can be frustratingly evident when stuck in the gridlock between Austin and San Antonio.