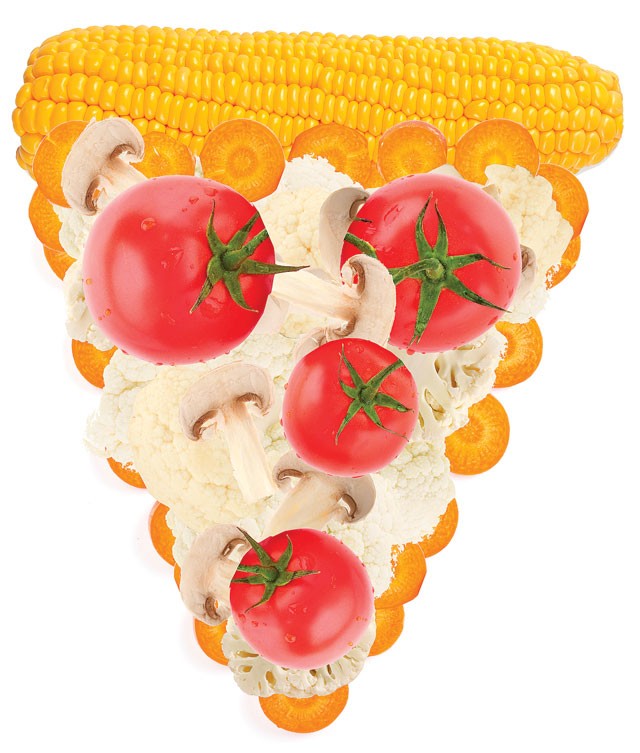 Industrial pizza interests passed under Congress’s rod with flying colors last month and corporations like Del Monte Foods and ConAgra must be celebrating the decision to allow pizza to be considered a vegetable in the government’s school-lunch program. The problem is that canned tomato products are notoriously contaminated with Bisphenol-A — the endocrine disruptor that’s to blame for altered sexual development in children. Additionally, in the case of pizza, any nutrients potentially left in a processed sauce are being delivered in minuscule amounts — nowhere near the “make half your plate fruits and vegetables” message from the government’s MyPlate initiative. Common sense has gone by the wayside as such nutrition-poor foods continue to slide into the mouths of those most susceptible to craving carbohydrate-rich, calorie-dense, sugar-laden processed foods: children. And as research and science consistently illustrate, the more processed the food, the more likely it is to damage our health.

But increasingly parents are fighting back. Fed up with imbalanced school lunches and highly processed foods in general, a growing number of moms (and some dads) in San Antonio are getting back to the basics. They’re making most everything from scratch. Not because they have to or because it’s always convenient, but because they enjoy the food more and know their families are better off for it. “We must get away from the mentality that our food will just be handed to us at the ready,” said Veronica Ramirez, mother of two. “My beef with restaurants and fast food is that they just don’t take the time to do things the right way and pay the food enough respect for it to be healthy. Why not make from scratch?”

Ramirez connected with other moms and dads over a love of cooking traditional foods via One Bite At A Time, a food-focused Facebook group (and offshoot of San Antonio Natural Parenting), that’s given way to in-person meet-ups. They cook food the way your great-great-great-great-grandmother did. No white sugar or white flour. No soy cheese, autolyzed yeast extract, or Yellow FD&C #5. No vital wheat gluten extract or caramel coloring. “Traditional Food,” as it’s called, are those foods eaten by people for thousands of millennia in all known civilizations; they’re organic foods harvested from the earth full of natural nutrition. They’re old and have history; they’re nothing new, processed, or improved.

Janet Elizarraraz organizes One Bite’s monthly meetings on the second Friday of each month and additional classes on how to make these unfamiliar, and frequently funky, foods. After all, traditional foods include ferments like unpasteurized sauerkraut and kimchi, sourdough, kombucha, cured meats, full-fat raw milk and yogurt, as well as butter and lard, grass-fed, pasture-raised or wild-caught proteins, and grains that have been soaked, sprouted, or fermented. The way they used to — and ought to — be done.

“It’s all a state of mind. It’s not hard but it takes a lot more time,” Elizarraraz said. “Some foods take courage to make when you’ve never seen or tasted it before. Wrapping your mind around it makes it easier.”

So far, she’s received an outpouring of positive feedback and support from parents desperately wanting to break out of the Standard American Diet (SAD) and connect with others on the same path in San Antonio. One Bite members have their own stories and are able to commiserate about their individual physical, mental, and emotional healing through nutritious, home-made foods. Mom Michelle Garrido lost weight and improved the health of her children naturally and gradually. “I lost 40 pounds over the course of the first year transitioning to traditional foods. I cured my daughter of eczema... and prevented the same from happening to her little brother. I like to think we are reversing our genealogical degeneration.” While her parents and grandparents suffered from depression, alcoholism, cancer, heart disease, diabetes, and more, she counts her use of ferments and fats from protecting her family so far.

Traditional food may taste better than processed, but it certainly doesn’t have to cost more. “In a typical week, I will make pastured roasted chicken, then all the leftover meat I use for chicken salad sandwiches for the next day, then all the left over bones I use to make chicken broth, and I can make a bunch of soups with that...I don’t throw away anything,” said One Bite member Edith Pena. “I make my own yogurt, bread, and such. I spend about $90 per week, and all our stuff is organic, pastured and grass fed.”

Resourcefulness and education come in handy here. Learning the skills to make it yourself far outweighs the convenience of any pre-made meal, both in nutritional content and in emotional connection to the method of preparation. After all, these are the ways our ancestors (no matter the ethnicity or nation) used to cook; cooking like them connects us to our heritage.

And what of pizza? Well, it certainly wouldn’t be considered a vegetable in any traditional food household, though you can be assured it would be carefully prepared with whole sprouted grains, raw cheese, and organic tomatoes, and enjoyed with gratitude. •