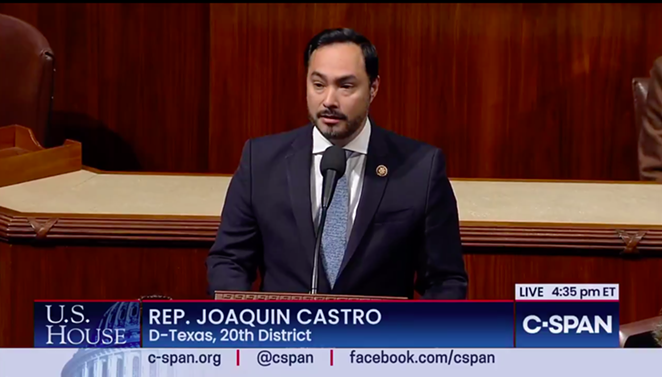 San Antonio's delegation to the U.S. House of Representatives voted 3-2 along party lines Thursday evening to impeach President Donald Trump. All five members took to Twitter to explain their actions.

Democrat Joaquin Castro was the most succinct in his comments following the vote.

I voted to impeach Donald Trump for abusing his office and obstructing Congress.

However, earlier in the day Castro posted a video of his speech in favor of impeaching the president for withholding military aid to Ukraine. "The military aid was released because the President got caught," he tweeted. "But getting caught doesn’t get you off the hook."

The military aid was released because the President got caught.

But getting caught doesn’t get you off the hook.

The only question now is whether we will find the moral courage to stand up for our country, and impeach the President of the United States.#DefendOurDemocracy pic.twitter.com/2UCt29RqEw


Democrat Lloyd Doggett didn't tweet following the historic vote, but he let followers know exactly where he stood the day prior.

Tomorrow I will vote to impeach President Trump. This is not a "whodunnit,” as Trump readily admitted his own misconduct. https://t.co/yceIupgLd0


Henry Cuellar, a Democrat whose territory includes San Antonio and much of South Texas, tweeted a link to a lengthy statement explaining he had no choice but to vote for impeachment. He also added that the House continued to pass legislation such as the USMCA trade pact during the impeachment process.

"I did not come to Washington to impeach a President; I ran for Congress to pass meaningful legislation for the district that elected me," Cuellar wrote. "This process brings me no joy, however, as a member of Congress, I have an obligation to protect our Constitution and our nation from abuses of power."

Those defenses of impeachment stand in sharp contrast to Republican firebrand Chip Roy, who linked to a statement defending the president's phone call to Ukraine's newly elected leader as an effort to root out corruption.

"House Democrats have failed to provide compelling evidence of high crimes and misdemeanors meriting impeachment," Roy wrote. "What they have succeeded in doing is upending the legislative session and tearing our nation apart in their long-standing effort to remove the president, now just over 10 months until the 2020 election."

Fellow GOP House member Will Hurd struck a note of compromise on social media, even though he linked video of his speech explaining his opposition to what he described as a rush to judgment.

"This experiment we call America has one perpetual goal: to make a more perfect union," Hurd posted. "We can contribute to this history if we recognize the simple fact that way more unites our country than divides us."

This experiment we call America has one perpetual goal: to make a more perfect union. We can contribute to this history if we recognize the simple fact that way more unites our country than divides us. pic.twitter.com/vBOAdl70q7

Hurd is leaving Congress at the end of his current term.