San Antonio Is Missing More than 2,000 Miles of Sidewalk 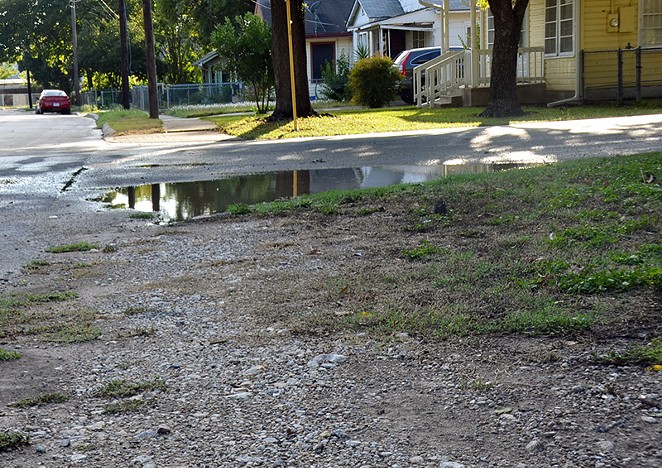 With more than 2,000 miles of missing sidewalks and San Antonio's largest-ever bond looming, City Council debated this week how much of the proposed $850 million should be used to fix missing sidewalks.

"We have sidewalk gaps, but where do broken sidewalks fit in or sidewalks that are nonfunctional because of utility poles," Gonzales asked.

Then Frisbie gave council the real total: "I failed to mention...there's about $1.1 billion in sidewalk needs."

City law currently requires taht property owners to maintain sidewalks, which is often difficult for them, Frisbie admitted, explaining that San Antonio does have $200,000 set aside to be used for 50/50 matches in a program to encourage homeowners to fix sidewalks, which has had few takers over the years.

Gonzales bristled at that, referencing a rural neighborhood in her district that sought sidewalks, but couldn't afford the $9 million it would take to build them. The high-price tag was because there was no related infrastructure either, like curbs and drainage, Frisbie said.

Gonzales' district, which is in southwest San Antonio, has 150 miles of missing sidewalk. Of the Alamo City's 10 districts, four have more than 250 miles of missing sidewalks, one is missing more than 300 miles and another is lacking just over 200 miles. In addition Gonzales' district, two others don't have approximately 150 miles. The district with the least amount of sidewalk gaps is missing just over 100 miles.

Councilman Roberto C. Treviño, an architect who represents the downtown area, said that all equates to roughly 35 million-square-miles of missing pedestrian infrastructure.

The vast majority of gaps can be found on the South, East and West sides of San Antonio, along with the urban center.

City Council will convene again in August and September where Frisbie will make a final recommendation.