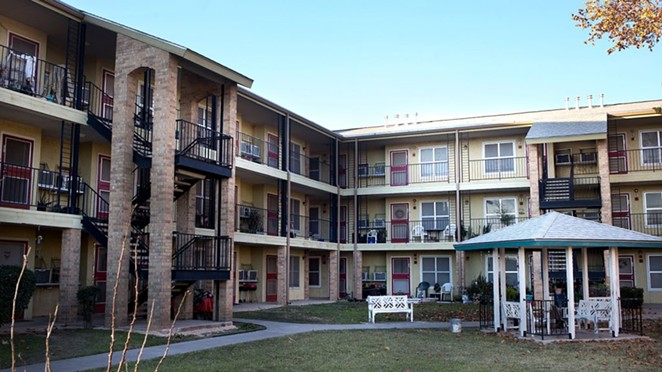 The city’s rental assistance program, which was created in 2018 partly to combat displacement due to gentrification, is now taking on a larger importance as many San Antonians struggle to pay rent during the coronavirus outbreak.

Since last week, the city’s housing department has become inundated with inquiries from residents who recently lost their jobs because of the partial shutdown. And there are efforts by public officials to secure large philanthropic contributions to augment the public dollars, which were already limited, during the crisis.

Meanwhile, the San Antonio Apartment Association is asking its members, which manage 160,000 units across the city, to forgive 25% of rent owed for tenants who receive aid from the city—a move that’s meant to help stretch the city’s rental assistance capacity further.

The city’s policy, known in government circles as the risk mitigation fund, was created by the City Council in 2018 as the city attempted to solve the direct and indirect uprooting of inner city residents brought on by city-subsidized housing developments and huge capital projects such as the San Pedro Creek Culture Park. It has developed into a city-wide program that helps residents stay in place by paying back-rent or mortgage payments—or mounting bills and other living expenses. If a tenant is already being evicted, the program chips in with moving expenses.

Before the pandemic, the program was already in high demand. Since last week, the demand has become a deluge.

To qualify, people must make 100% area median income (AMI), or less—which is $71,000 for a family of four in the greater San Antonio area. They must also provide proof of income and documents showing they cannot pay living expenses.

Currently, $400,000 is available in the fund for disbursement among San Antonians in need. The average amount distributed per household is $1,000, Merla said. Residents can receive up to $3,500 for rent or mortgage assistance depending on their situation.

On Monday, the San Antonio Housing Trust Foundation, an entity tied to the city’s housing trust nonprofit, will vote to allocate $500,000 toward the risk mitigation fund. There are talks with the local arm of the Local Initiatives Support Corporation, commonly known as LISC, to contribute more dollars, Assistant City Manager Lori Houston told the City Council this morning.

Anyone can donate to the fund.

“We have set up an account with Area Foundation and United Way so people can donate directly to risk mitigation fund,” Houston said.

To donate, visit helpsatx.org and indicate you want to support the “risk mitigation fund.”

Houston, who oversees NHSD, said the city is looking at other funding sources, mainly incoming federal grants, to help engorge the fund. It’s worth noting that the City Council allocated $1 million to the fund for the current fiscal year—10% is used to provide a lawyer for people going through the eviction process.

In mid-March, the Bexar County Justices of the Peace suspended eviction court proceedings, a move made a week after Judge Nelson Wolff ordered property owners to suspend evictions for 30 days. Soon after, Bexar County Tax Assessor-Collector Albert Uresti canceled property tax foreclosure sales for April and May. SAWS and CPS Energy have also suspended service disconnections during the pandemic.

The San Antonio Apartment Association is urging landlords to work with their tenants during this time by providing discounts and waiving fees, a gesture the city appreciates.

“The risk mitigation fund has not changed, but we are appreciative of any landlord that works to make our dollars go further,” Merla said.

Ross said everyone he’s spoken to in the association have supported the measures. The association is also asking its members to contribute directly to the risk mitigation fund, if they’re able. Forgiving 25% rent is just as valuable, Ross said.

“Most people are working out deals,” Ross said. “Some (management) companies are waiving 10% of the rent . . . some are waiving all of the fees.”

Here are the latest area median income (AMI) levels for the greater San Antonio area (Bandera, Bexar, Comal, Guadalupe and Wilson counties), according to the U.S. Department of Housing and Urban Development. Want to know more about how AMI works? Click here.

The San Antonio Heron is a nonprofit news organization that relies on support from readers like you. We accept donations via PayPal and Patreon (monthly only). All donors will be listed on our site.