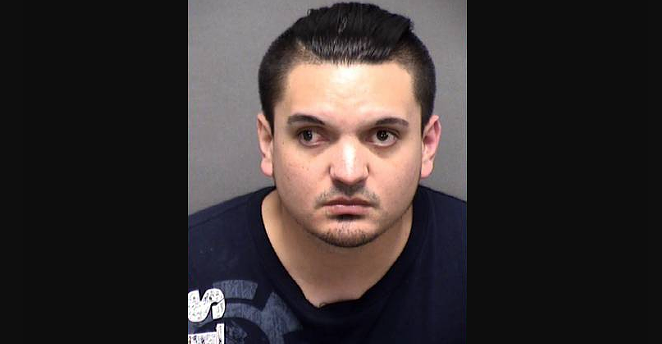 A San Antonio man was arrested earlier this week after a woman said he sexually assaulted her and abandoned her at a Whataburger last month.

Police arrested Juan Angel Perez, who is accused of sexually assaulting a woman in his car on April 21. According to the arrest affidavit, Perez contacted the victim through a website called Meet Me and the two arranged to go out after chatting online for a week. The 32-year-old man picked up the victim and they drove to a parking lot where the two talked in the backseat of his car, court documents reveal.

The victim told police that Perez eventually forced himself on her and sexually assaulted her after she told him "no" and to "stop," according to KSAT.

Afterward, Perez drove to a nearby Whataburger where he let the victim out to use the restroom, according to her statement. When she came outside, she realized Perez had left the restaurant — and with her purse in the car.

The woman said she called Perez repeatedly in order to get her purse back but that he didn't answer.

On April 29, Perez reportedly agreed to meet the victim at Blanco BBQ to return her purse. At that time, he allegedly propositioned the victim for sex in exchange for money, which she declined. The victim began to leave the restaurant, at which point Perez followed her and said he still had her wallet in his possession. The woman then called 911 and went to a police substation where she reported Perez to authorities.

A police investigator said Perez was accused of sexually assaulting another woman he met through Meet Me last year. Perez's account, which was still active, was reportedly using a different name, Blake, and photos of another man.

Perez is facing a second-degree felony charge of sexually assault.