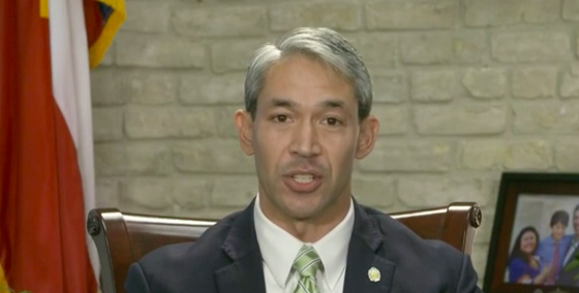 During a televised address on Tuesday, Mayor Ron Nirenberg pulled the plug on a November vote to expand public transit by diverting tax money meant to protect the city's primary source of drinking water.

Nirenberg and Bexar County Judge Nelson Wolff had championed a controversial plan to shift $40 million in sales tax now used to buy land to protect the Edwards Aquifer into the coffers of VIA Metropolitan Transit so it can expand to meet city growth.

However, as San Antonio struggles to economically recover from the coronavirus pandemic, Nirenberg said its focus should instead be on rebuilding and addressing deep inequities worsened by the crisis. Leaders can't afford to let jobs and wages "evolve into more poverty and homelessness," the mayor warned during the 20-minute speech.

"This is a painful, but necessary, decision for us," Nirenberg said. "But direct action to ensure a healthful economic recovery means rebuilding now. We will take the time we need to fully understand the depth of the pandemic’s financial damage before making new investments."

The city will look for other ways to help modernize and expand VIA, Nirenberg said.

He also said the aquifer protection funding will continue while the city rebuilds its economy. Due to lowered tax revenue the program won't be up for review again until summer of 2021.

"Prudence requires that we wait until next year to make a final decision about the future of the program’s funding, which for decades has made progress to ensure an adequate amount of clean recharge flows into the aquifer," he added.