On Friday, the San Antonio Museum of Art installed a new permanent member of its collection on the museum's grounds. The six-and-a-half-ton Taihu Scholars' Rock, which had been waiting patiently in storage since its arrival in late May, was carefully positioned on a pedestal behind the museum's River Pavilion, where it will be visible from both the museum and the River Walk.

China's Taihu Scholars' Rocks draw their name from Lake Taihu, where they are quarried. The limestone rocks' unique pattern of holes are formed naturally by water erosion, and have been valued in Chinese culture for over a millennium.

The rock at SAMA was gifted by San Antonio's Sister City of Wuxi, which is located on the north side of Lake Taihu. It's one of only a few Taihu Rocks on display in the United States. 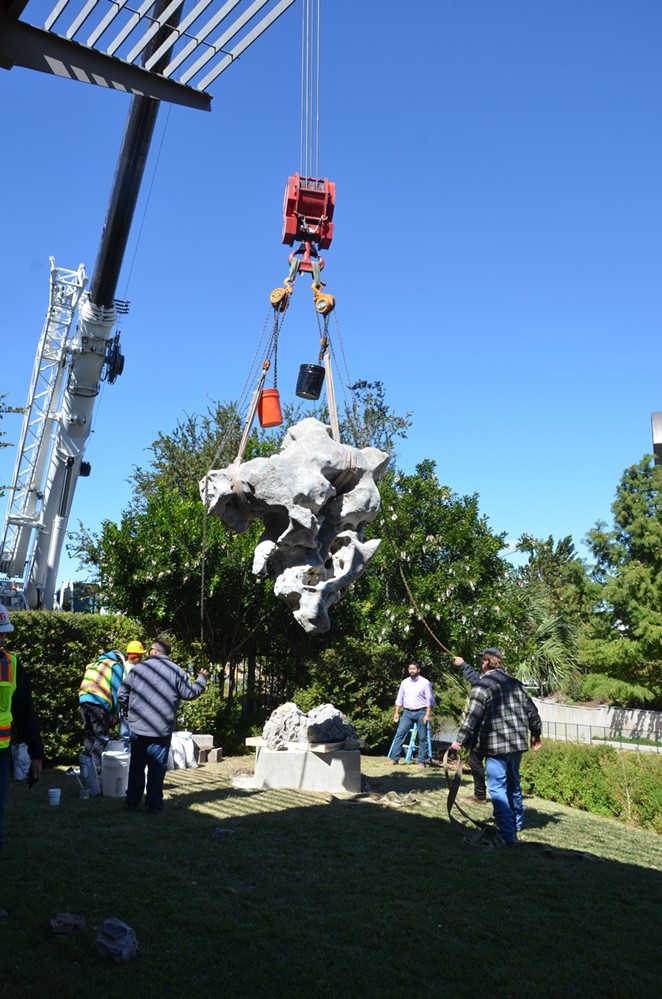 “This type of rock is considered an embodiment of the yin-yang dichotomy and represents harmony between man and nature,” SAMA's Assistant Curator of Asian Art Shawn Yuan said in a statement. “Some of the best of them are quarried near Wuxi on the shores of Lake Taihu.”

Installation of the massive stone was an all-day affair. Friday morning was spent moving the piece from storage, and its final positioning commenced in the afternoon. A1 Engineering and SAMA employees crowded the back area of the pavilion as the rock was gingerly lifted by a crane and carefully placed on a pedestal tailor-made by local architectural firm Overland Partners.

SAMA Director of Marketing Tatiana Herrera-Schneider said that the engineers who installed the rock were inspired by an unlikely source — dental implants. Much like how a new tooth is implanted by a dentist, the Taihu Rock was delicately balanced, then fixed in place with a rod and epoxy. To commemorate the arrival of the Taihu Rock, SAMA has collaborated with the Wuxi Museum to bring the exhibition Elegant Pursuits: The Arts of China's Educated Elite, 1400-1900 to San Antonio. Elegant Pursuits features 26 works of Chinese art celebrating the tradition of collecting and appreciating rocks. Some of the pieces have never travelled abroad.

The exhibition will be on display November 7 through February 13, 2020.

A public dedication of the Taihu Rock will be held on Tuesday, November 12, during the museum's free general admission hours. The dedication will feature  art activities and tours of Elegant Pursuits.